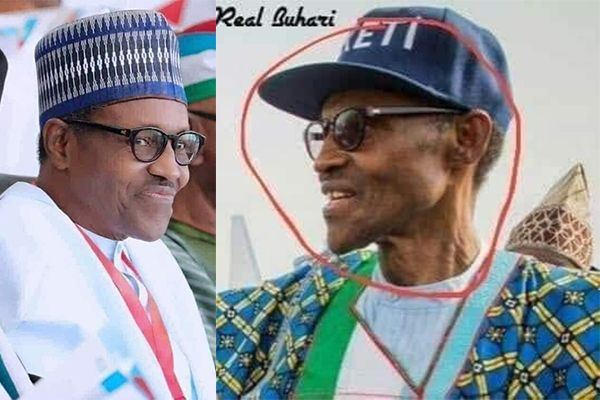 Nigeria currently is plunged into confusion following the suspicion behind the real identity of their president. This issue was brought into consciousness by the leader of the Indigenous People of Biafra, Mazi Nnamdi Kanu, who recently began a series on the Radio Biafra shortly after his reemergence to continue the struggle for the actualization of the sovereign state of Biafra for Ndi Igbo entitled “Unmasking Jubril.”

On two consecutive times since his return, Kanu who is a crown prince, and holds the rare chieftaincy title, “Ohamadike” which literally means “The society knows a warrior,” has publicly stated on radio Biafra station that the current Nigeria’s president is an impostor imposed by a certain Fulani-Hausa cabal led by Chief of Staff to the president, Abba Kyari to ascertain that political power does not slip off the hands of Fulani-Hausa oligarch.

Read Also: The most famous quotes of Mazi Nnamdi Kanu

Kanu before the battalion of armed soldiers stormed his country home had a month earlier said openly that Buhari was dead, and the man in Aso Rock was not Buhari. Kanu was still on bail, and billed to appear in court to answer charges levelled against him by the Federal Government of Nigeria then when that gruesome attack by the Nigerian Army was meted against him, and his family.

Majority of Nigerians now believe that the Nigerian Army acting under the instruction of the presidency or perhaps the so-called cabal in power attacked Kanu purposely to permanently shut him up on that issue.

Kanu speaking in a live broadcast from Israel on Saturday, being November 24, 2018 made some shocking statements that ordinarily should not be taken for granted by a responsible and responsive government.

Nnamdi Kanu who strongly fingered the British Empire in his expose` of “Jubril” when he said that “Queen Elizabeth issued a condolence letter to Nigeria concerning  the death of Buhari.” Yet Her Majesty, Queen Elizabeth has not refuted Kanu’s statement.

It’s equally shocking that Aisha Buhari, the beautiful wife of Buhari is yet to issue a press release to counter Kanu’s point that, “Aisha Buhari went to Saudi Arabia to bury her husband, and that’s why she was dressed in white as demanded by Islamic doctrine during that period of her mourning.”

Nigerians are  not even worried about emphasis on the other points Kanu raised such as height, frail nature of Buhari and whether he is/was left or right handed compared to his alleged impostor Jubril who is slightly shorter, left-handed and looks very healthy, as much as they are worried about the reason for the presidency’s silence which is very much unusual when juxtaposed with the swiftness at which they are known in defending their principal.

Many Nigerians are shocked, and have taken to the social media to express their disappointment  that up till now, the FGN have not instructed their overzealous defenders such as Lai Mohammed and Festus Keyamo to clear the air on this pertinent issue bothering about the real personality of Buhari

For some Northern Nigerian citizens being of the opinion that Buhari has no explanation or proof to give anyone, it’s  rather preposterous and unacceptable because President Buhari or the impostor, Jubril is being maintained by tax payers’ money, and the resources belonging to the entirety of Nigeria as a sovereign state, and as such the citizens have the right to know who is actually occupying Aso Rock as an elected president else their continual long silence will only amount to one thing, and that is Nnamdi Kanu is right when he says that Buhari is dead, and the man being paraded as President Buhari is Jubril Al-Sudani from Sudan.