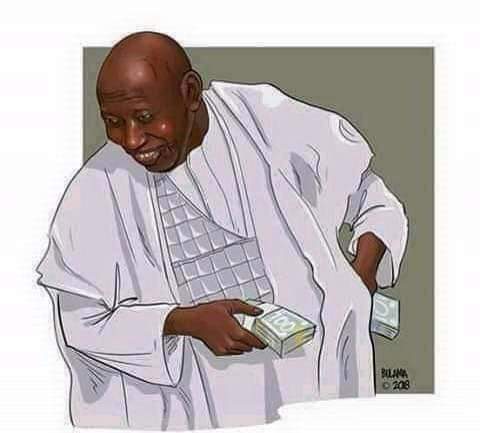 By People & Polity
Many Nigerians who are very well acquainted with the nepotistc maladministration of President Mohammadu Buhari  were not the least surprised when the Kano state governor, Abdullahi Umar Gandjue and the man who makes dollar rain put up a defence that all the videos where he was clearly seen stuffing his Agbada with dollar is a drama that he knowingly recorded.

It’s not only a pity but equally laughable how the APC led government have so far taken Nigerians trivially that it now feels so comfortable and pleasurable to loot public treasury with reckless abandon right in public glare or deliberately on camera.

Hollywood is associated with dollars, and Ganduje is rated in the same category with the likes of Dwayne Johnson, and the rest, so he can’t condescend so low to join Nollywood where insignificant naira is being  used.

The most infuriating factor here is that the Buhari led APC government who froze Ayo Fayose’s account and accused him of all sorts of things even without evidence are wining and dining with the dollar man.
To ‘Mr kwarraption’, Gandollar is not corrupt because he is in APC. That’s Buhari’s double standard on his fight against corruption. Mr integrity in deed.
To whom it may concern, we now have a celebrity Hollywood star Nigerian governor.
He is Gandollar, and loves to make dollar rain!