BREAKING : “Fr. Mbaka Auctioned The Spirit of Prophecy of God To The Highest Bidder” – Parishioner 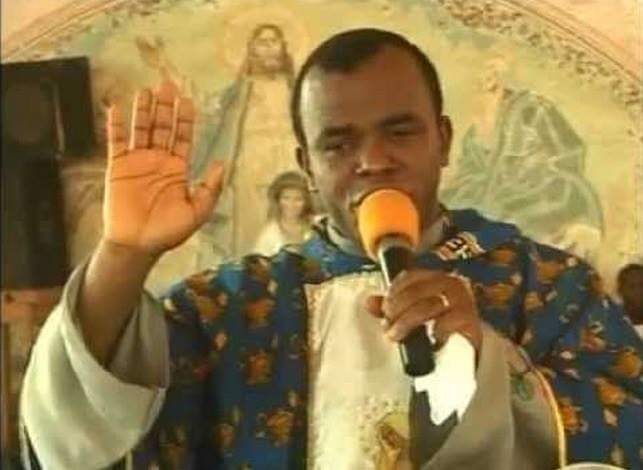 The recent murky waters Reverend Father Ejike Mbaka, the spiritual director of the Adoration Ministry Enugu Nigeria (AMEN) stepped in wouldn’t stop creating ripple effects as Nigerians keep expressing their dismay over what many described as the Reverend Father’s “voracious lust for money.”

Consequent of the action of the once revered Catholic priest, a disgruntled parishioner, Mr Salem Chukwuemeka Ezeorah of his AMEN congregation has just petitioned the Catholic Bishop of Enugu Diocese, Dr Callistus Chukwuma Valentine Onaga to sanction the priest.

It was on Sunday, December 2, 2018, that Adoration Ministry Enugu Nigeria – (AMEN) had her annual Harvest and Bazaars.

The Bazaar attracted the High and Mighty in the society. People like the former Governor of Anambra State and currently PDP Vice Presidential Aspirant was there. Governors of Ebonyi, Enugu, Kano et al.

Sir, I write you this letter because, the outcome of the event was louche to my very understanding of Roman Catholic methodology and Christianity at large.

Rev. Mbaka, in his hunt for money to the CHURCH ‘I suppose’ became obviously fraudulent and wrench.

He practically auctioned the spirit and prophecy of God at the alter of highest bidders.

His actions didn’t delineate a man with human conscience; a man who’s major concern is for the good of the society. He would summon both APC and PDP leaders and lure them into donating to the church or have his prophecy come hard on any form of nonacceptance and or disallowance.

He made it distinctively clear that Adoration Ministry Enugu Nigeria is for APC and Buhari; even without Buhari campaigning to them, that he-Buhari belongs to the alter of his ministry – a Muslim bigot for that matter.

He cried out at same alter how the Presidency turned him to an errand boy that is tossed back and forth by the waves of the presidential ringtone. He would go to Abuja and stay for days without seeing his supposedly principal that sent for him. He would repeat and repeat…what a despondence. What a shame; even if he is jobless.

He lamented how he was moved from GRA to a forest because of Buhari; how assassination attempts were carried on him; how he was almost dead and rose again because of Buhari. All he got was ZERO BENEFIT. Suggesting that all his actions were profit oriented and that we must know he is in real business.

He made it clear that he is still waiting on Atiku/Obi to play ball. He’s also waiting for Buhari/Osibanjo to do same. All before the 31st of December, 2018. The highest bidder has the prophecy – says the lord of Adoration Ministry.

Adoration Ministry supporting Buhari was torrential in his speeches.

He made it clear that Buhari’s life and health is hinged to Adoration Ministry and by the time they cut the ties of his spiritual oxygen, Atiku would take over, been that Atiku ambushed him in the spiritual forest where he will let of his life and his health collapses.

But if Buhari brings MONEY, Adoration Ministry would support him again and he wins it all, not minding if his leadership is credible…

After the first video went viral where he disgraced Dr. Peter Obi out of the pulpit for not supporting his ministry, he brought Gov. Ganduje of Kano State whom we know of his recent foremost integrity, and told him that Buhari will not rest until he-Mbaka is settled; that he await Governor Ganduje’s return to the ministry; that if he comes back MEANINGFULLY, that they will welcome him HAPPILY.

Sir, you can agree with me that these actions are very shameful and it is enough to cost him the job and lift him to the first number in the “Hall Of Shame” amongst Roman Catholic Clergies and Igbo elites.

I therefore solicit that the body of Christ take up this development to making sure that such lordly and bumptious attitude of Rev’d Father Ejike Mbaka is brought to stricture.