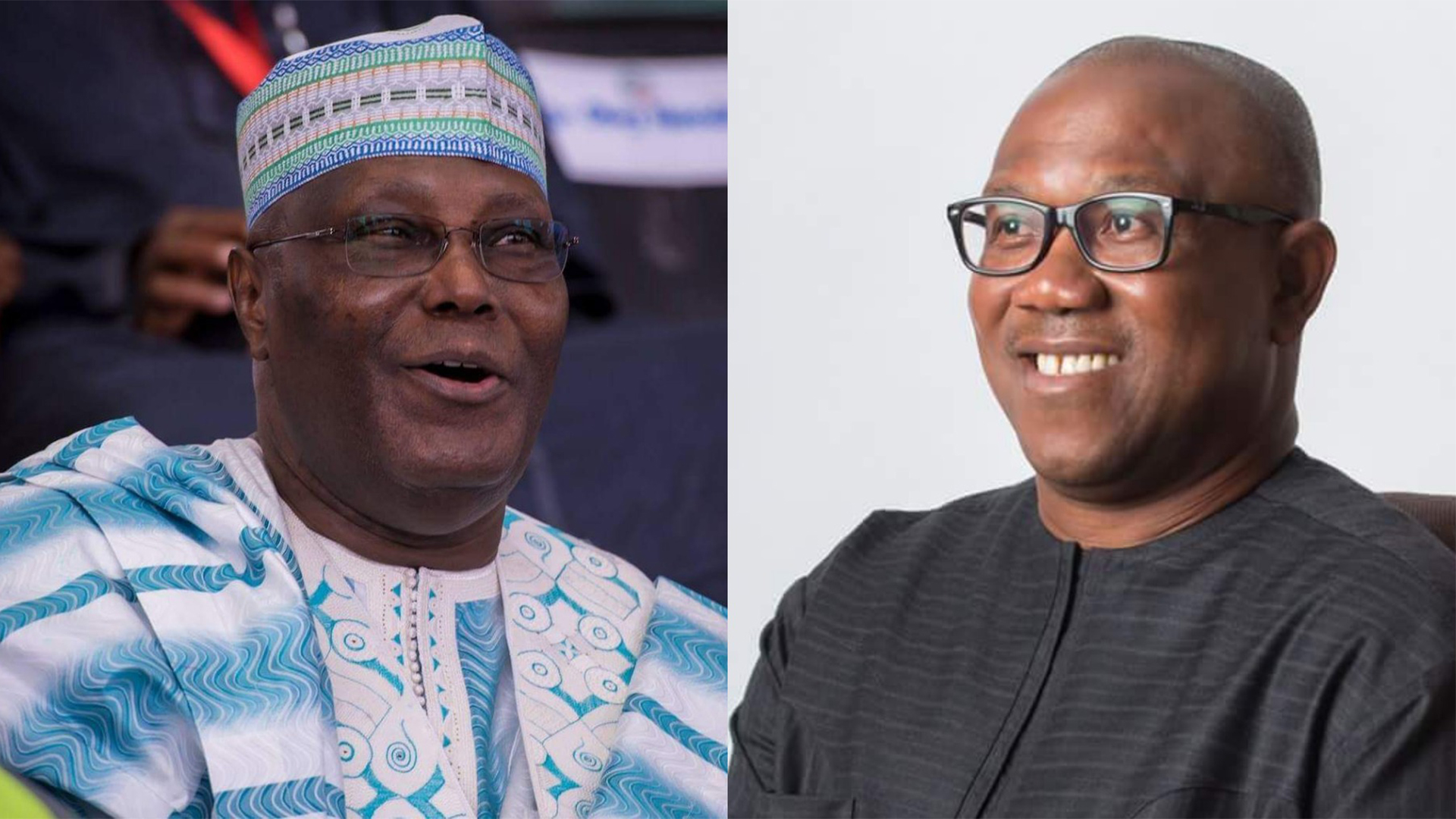 Question
Why do you believe that Nigerians should elect you president and vice?

Atiku
For the past 3 years, I believe that Nigeria should compare the PDP government and APC government.
APC hinged it’s campaign on economy, security and fight against corruption.

When they came in, Nigeria GDP was one of the best, but now it has turned to worse.

Security, at the time they came in North west and North East was almost ending, but it has turned to worse today.
In summary, the APC government has performed below par.

As far as experience is concerned, I’m the most experienced.
I will bring my business acumen here.
I’m a gap between the new and old generation.

Question
You criticized old people running for Presidency, and now you are contesting with a man of over 70 years.

Obi
I look at experience.
If you look at the cumulative experience of Atiku, we need someone who can bring the country together, and I will be there to support him.

Question
What’s your view on corruption?

Atiku
My view of corruption is using your privilege and influence to enrich your friends and relatives.

Question
Would you consider your setting up a logistics company while a Customs officer as corruption?

Atiku
It was what was obtainable then.
Customs officers were legitimately allowed to buy shares and invest, and to indigenize things.

The information was not correct!
My company was not registered for clearing and forwarding, but logistics and oil and gas.

Question
Your company was given monopoly on oil and gas.

Atiku
I was not given monopoly, it’s a misrepresentation of fact!
There was competition and there is still competition.

Question
Conflict of interest
When you were a governor, you invested 2 billion in intafact and your company next is a major shareholder.

Obi
I brought international brewery into Nigeria.
The company asked me as a partner, that I should own 15%, and I said no.
Anambra State is going to invest 10%.
I invested 30 million dollars Anambra state money in International brewery business and today it’s worth over $100 million, no state has ever done that.
Next is family company owned by my father, and as the first born, I managed it but when I became a governor, I had nothing to do with NEXT.
I left office leaving 75 billion and investment.
I left 50 million dollars in Fidelity bank, and 47 million dollars in Access bank………….

Question
In your manifesto, you have fighting corruption as one of the indices.

Atiku
Prevention is better than cure.
We will introduce technology in the private and public sector.
Example is the United Arab Emirates.
We have to automate everything, as it will reduce corruption to the barest minimum.

Question
Would you make efcc to be independent and fight even your friends?
What are your plans for the judicial system?

Atiku
We will look for ways to make the judiciary shorten the time for cases with legislation.
I will make the EFCC independent, as I facilitated the bill that established it.
I borrowed efcc 300 million that they used to start up.
Most of the cases that are still going on in the efcc are cases PDP started.

Question
What sort of reform are you looking at in the judiciary and security agencies if you become President?

Question
What about existing cases?

Atiku
There will be need for dialogue, and procedures and laws must be reviewed.

Question
Would you consider an amnesty?

Why not?
Turkey gave amnesty, and the whole money abroad came back.
They even gave tax cut to them, and those funds were plunged into industries, etc
When Obasanjo did it, we recovered over 4 billion dollars.

Question
Won’t it be morally wrong to give amnesty to looters?

Atiku
It depends on what you want to achieve; moral rectitude or to see the economy grow.

Question
On the issue of corruption, the United States committee mentioned your wife’s name in a case.

Question
Is it better we seek an amnesty to bring the money and invest it and grow the economy?

What is the difference between APC and the PDP as many Nigerians believe that both are the same as they switch parties?
Both of you are guilty of switching parties

Atiku
Who is an exception?
Is it Buhari who had 4 parties?

The difference is that those who are in PDP today are no longer bad, the bad elements have gone to APC.

Question
You were a member of Apga and you abandoned it because you couldn’t have a chance to play a national politics.

Obi
If i have a car that can’t take me from onitsha to Lagos State, what’s wrong if i decide to board an airplane?

Question
In specific terms, what are the plans for the poorest of the poor?

Atiku
The middle class is completely eliminated in Nigeria today.
You must have a middle class before uplifting the ones at the bottom.
The greatest job creation sector in Nigeria is the agricultural sector.
We seek to empower the farmers to be more commercial.
PDP was doing it better when we make the sharing of the fertilizer to the farmers on the mobile phone.
I set up a micro finance bank and I brought someone from Bangladesh because they are the best in that field.
I directed that they give loan, and we lifted 45,000 families out of poverty.
If I can do it in my private capacity, imagine what we can do as a government.

Question
If your home state has not seen appreciable change when you were the Vice President,why would they believe you now as a President?

Obi
Let me go back to issue of job creation.
You stated clearly that the government and Atiku are the highest job creators.
That clearly means Atiku has done well for his people.

India was the country with people living with extreme poverty.
India moved from 176 to 76
They did it in just 2 years.
Whatever they did, we can do it.

It took this government 3 years to formulate a program, but Atiku Abubakar already has a program and what’s remaining is implementation.

Question
I don’t think lifting people out of poverty is a private sector thing.
America as example ………..

Leading people out of poverty is private sector driven.
Every society has its peculiar problem.
You cannot use Little America problem to judge Nigeria.

Question
Obasanjo accused You several times of being Corrupt and he is now asking Nigerians to vote for you, what’s your take on that.

Atiku
If the former employer now said you are the best, and is fit for for the job.
Nobody has investigated me more than Obasanjo, if he couldn’t find me guilty, it’s up to my employers to believe what he said.

Obi
(gives example with VAR )
In football now, referees use videos to determine issues, and they have found out they made mistakes in their judgments, and that’s exactly the case between Obasanjo and Atiku

Question
How are you going to tackle the herdsmen/farmers crisis in Nigeria, particularly as a Fulani man who rear cows?

I believe that the solution is to enlighten the herders to adopt feeding lots/ranches.
America faced the same problem, and what they did was creating feeding lots.

Question
You deported Beggars from Anambra State to Akwa ibom

Obi
Do you know my wife is from Akwaibom, I cannot deport people to their place, I’d rather welcome them to Anambra.
I never deported anybody from Anambra State!

Question
What would you say about Boko Haram?

Atiku
In the issue of Boko Haram, lack of equipment and morale of the troops are some of the problems.
I will be willing to investigate the military hierarchy.
When you have been provided everything you need as soldiers, and you are overrun, I will deal with you.

Question
What’s your take on the Shiites and military clash?

Atiku
In Shiites issue, I don’t see why the military should be involved.
It’s a police case and even if the Shiites blocked them, they should have called the police.

Question
Why are you not paying enough tax.?

Atiku
My companies pay tax as private entities and I pay as a public servant based on what I earn.

Question
Why would you grant companies tax cut?

Atiku
Lower corporate taxation will make the companies come in invest, and create jobs.
The people they employ pay taxes and the GDP will grow.

Question
PDP have been accused to spend 16 billion dollars on power, yet nothing, what would you say about it?

Obi
APC has not invested a dime in power.
Everything you see today is the investment of the PDP.
Look at the commissioning of airports, it was the counterpart funding PDP paid that finished the airport.
The APC only delayed things and claimed they did it.
They have not done anything on power.

Question
If you lose elections, would you accept defeat?

Atiku
If the elections are adjudged to be free and fair, why not?