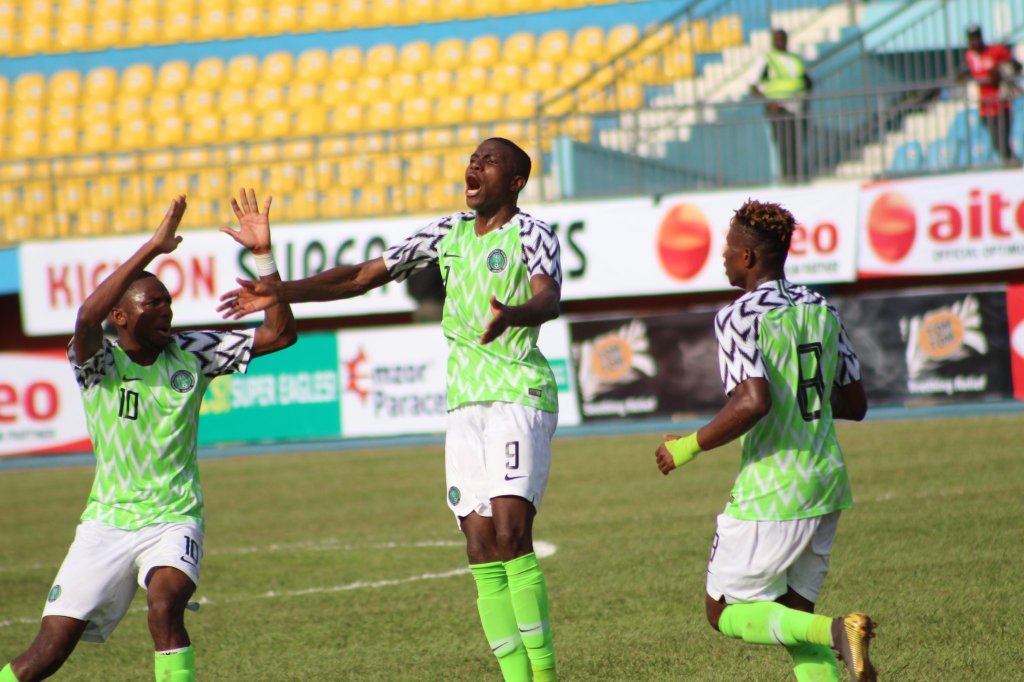 Victor Osimhen’s hat-trick and a goal from Chidozie Okereke against Libya handed Nigeria a slot in the U23 Africa Cup of Nations. Imama Amakpakabo’s men rallied past the Libyan 4-0 after losing the first leg 2-0 at the Ben Guerdane Stadium in Tunisia.

Osimhen, Valentine Ozornwafor, Chidozie Awaziem and Francis Uzoho were drafted into the team after the team lost the first leg. The quartet were included in the starting line up at the Stephen Keshi Stadium, Asaba.

The on-loan Charleroi forward opened the scoring in the 33rd minute reacting quickest to stab home a loose ball.

Minutes later, with Nigeria increasing the pressure and limiting the Libyans to the edge of their box, Chukwueze hit the top of the crossbar with a dipping freekick from the left.

Nigeria headed into the break in the ascendancy but still needing two more goals to seal qualification.

With more verve and purpose, the Dream Team probed seeking an opening.

Liverpool forward, Taiwo Awoniyi, was substituted in the 78th minute and replaced by Okereke.

After winning the ball in the midfield third, Kelechi Nwakali spotting Osimhen’s run lofted an inch-perfect pass for the forward to finish past the goalkeeper for his hat-trick. The charged atmosphere in the stadium got its extra jolt as the fans celebrated wildly. The Dream Team had overturned the deficit.

Okereke got the icing on the cake in the stoppage time after solid work on the right by substitute Dennis Bonaventure. The winger beat two defenders on his path and angled a shot that the goalkeeper kept out, Osimhen backheeled the loose ball into the path of Okereke who applied the finish for Nigeria’s fourth goal.

Osimhen was the name on the lips of every fan, drafted from the senior team to get the Dream Team over the finish line into the 2019 Africa U23 Cup of Nations to be held in Egypt.