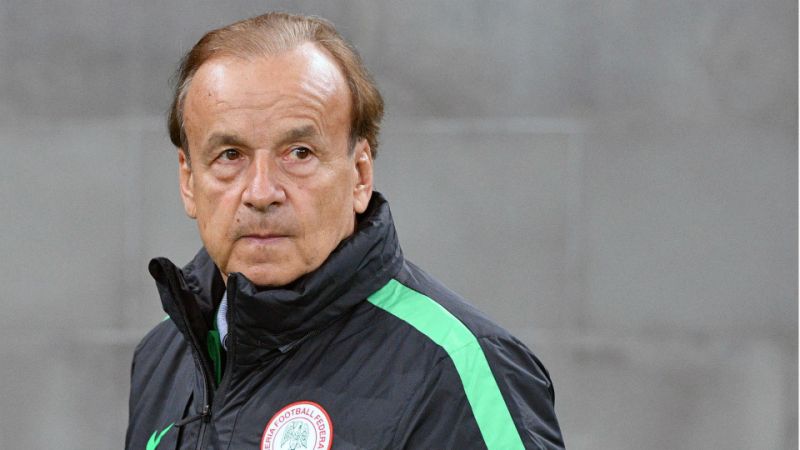 Despite handing out Nigeria’s first defeat to Egypt since 1990, one of the favourite teams to win the 2019 AFCON in summer, Super Eagles Head Coach, Gernot Rohr is not deluding himself that he has a team to surprise the continent yet.

Speaking at a crowded post match briefing shortly after Paul Onuachi’s record eight second strike welcomed the Pharaohs into the Stephen Keshi Stadium in Asaba on Tuesday, the Franco-German coach admitted his team is still work in progress but not looking for new players.

“No, there is no need calling up new players to the Super Eagles before the Nations Cup. Now, we already have 69% of the players that will go the Nations Cup,” stressed the gaffer who qualified Nigeria for the AFCON 2019 with the reverse fixture game against Seychelles pending.

Inspired by his wards display against the seven-times AFCON champions in Asaba that Tuesday evening, Rohr insisted that Nigeria’s next round of tune up matches will determine the remaining players to make up his 23-man squad to Egypt in June. “In the coming friendly matches, we will know. We still have some friendly games that will help us get ready for the AFCON.

He however remain resolute that no new player can displace any of the current Eagles in camp.

“I don’t think it will be possible for a new player to displace any of the ones we have now, so we are going to work with the current players.

Interestingly, while Rohr is happy with how his team is evolving, his opposite number in Egypt, Mexican Javier Aguirre is unfazed by the first defeat he suffered on the Pharaohs’ job.

“I am happy with this serious experience against a big team (like Nigeria). We benefited from the match after examining new faces amid our strategy to inject new blood into the squad ahead of the African Cup,” he noted earlier at the post-match.

Aguirre admitted that after that initial shock from Onuachu’s thunderbolt, his wards regained balance and proved their worth even in the face of several top stars absent from the team.

“Our players restored the balance quickly and were a stiff opponent for the hosts. The whole match was a balanced one, except the early few minutes that witnessed the goal,” he explained.

Rather than feeling low, Aguirre is rather taking the positive from the defeat in Asaba, most especially having the chance to experiment with new, untested players in his team.

“I am happy with this serious experience against a big team. We benefited from the match after examining new faces amid our strategy to inject new blood into the squad ahead of the African Cup,” he concluded.

Just Like Nigeria, Egyptian is due to play three other friendlies in final preparations before the tournament scheduled to take place between 21 June to 13 July.

Egypt is aiming to win the continental football showpiece for the first time since the Pharaohs were champions the last of their record seven trophies was in 2010.