Sowore: The Guardian UK Calls Nigeria ‘A Climate Of Fear’ 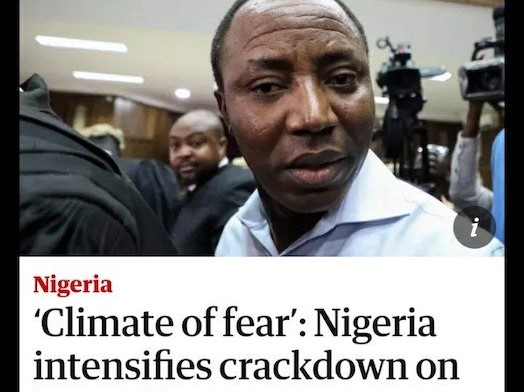 Fisayo Soyombo was eating an evening snack in Lagos in late October when a colleague called to warn him about a plan hatched by Nigerian government officials at a clandestine meeting to arrest him.

Hours earlier, the second in a three-part undercover series by the Abuja-based investigative journalist on corruption in Nigeria’s criminal justice system had been published.

“I made two more calls that night [to government sources] and it was clear I was in trouble,” Soyombo said. According to all three contacts, the government wanted to prosecute him under a law criminalising certain types of communication with inmates.

Soyombo pulled out of a public event he had travelled to Lagos for, and went into hiding.

Had he been detained, Soyombo would have been the latest victim of a crackdown on the media and freedom of speech this year in Nigeria, which is 12th out of 13 on the Committee to Protect Journalists’ Impunity Index, a ranking of countries with the worst records of unsolved murders of journalists.

Soyombo said he received a lot of support on social media in the days after he went into hiding, and that the plan to arrest him has seemingly been dropped. The Nigerian correctional service eventually released a statement saying work could be done to clean up the system, and that it had “no intention of arresting or harassing” Soyombo.

At least three journalists are currently detained in Nigeria.

Omoyele Sowore, an activist and founder of the New York-based online news agency Sahara Reporters, was taken by secret police from a hotel room in Lagos in August. Sowore, who stood as a candidate in February’s presidential elections and usually lives in the US, has been charged with treason, cyberstalking and money laundering for allegedly sharing false and insulting information about the president, Muhammadu Buhari. Despite being granted bail earlier this month his lawyers said they were denied access to him, and he remains in detention and is currently on hunger strike.

Jones Abiri, the publisher and editor-in-chief of the Weekly Source newspaper, was arrested in May and charged with cybercrime, sabotage and terrorism. The case related to 2016 allegations of links to rebels in the Niger Delta, after which he was detained by Nigeria’s intelligence agency for two years without trial.

In the southern state of Cross River, Agba Jalingo, who publishes the Cross River Watch paper, was arrested in August, days after the publication of an article about alleged corruption. Jalingo has been charged with treason and a bail request has been declined.

Human rights activists and civil society groups say that the muzzling of the press under Buhari has raised the spectre of a return to the dark days of military rule in Nigeria.

Buhari, a former army general who has been president since 2015, was also Nigeria’s head of state in the mid-1980s, when he took power in a military coup. At the time he introduced the draconian Public Officers (Protection Against False Accusation) law, better known as Decree 4. The law targeted the press, criminalising the publication of information deemed injurious to the junta.

“These [recent] incidents suggest a disturbing trend towards repression of freedom of expression and create a climate of fear which may stifle the media,” said Anietie Ewang, Nigeria researcher at Human Rights Watch. “Throwing reporters in jail for doing their job of informing the public sends a chilling message to journalists, activists and citizens.”

Soyombo said gagging the press was a misuse of power. “It is an irony that a president and state governors who ascended to power via the polls can suddenly not tolerate dissent,” he said.