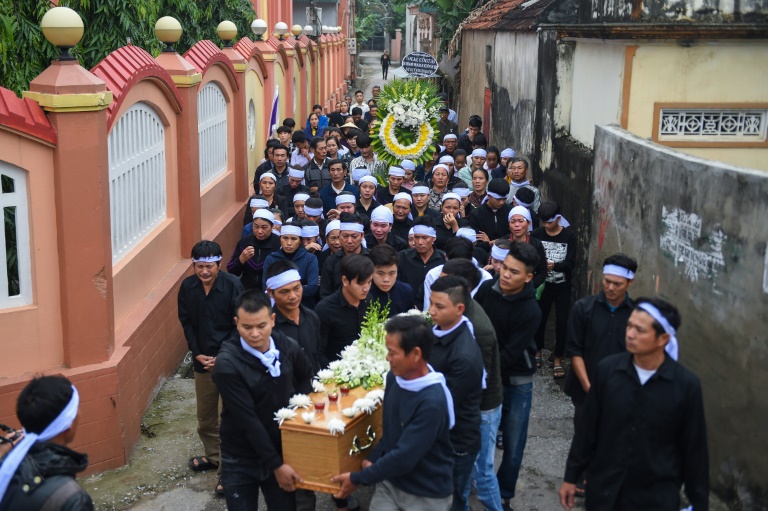 Throngs of weeping relatives on Thursday buried the first of 39 Vietnamese people found dead in a truck in Britain last month, in emotional ceremonies for the young victims whose deaths have rattled their rural towns.

The first of the remains arrived in Vietnam from London on a commercial flight Wednesday, closing a weeks-long, agonising wait by families eager to have their children back home.

All 31 men and eight women found dead in a refrigerated trailer in Essex last month were Vietnamese, many from small towns in central Vietnam.

On Thursday several families laid their loved ones to rest after long nights of emotional vigils.

Under rainy skies in central Nghe An province, scores of relatives and villagers gathered for a final farewell for Hoang Van Tiep, 18, Nguyen Van Hung, 33, two cousins who died on the truck.

“I’ve never attended a funeral as big as this. It’s a sad day for all of us,” said a neighbour Hoang Thi Mai, her eyes wet with tears.

AFP / Nhac NGUYENVictims’ families have waited weeks for their bodies to come back, and took loans from the government to cover the cost of repatriation

“I hope they are happy in heaven,” she added, as their flower-flanked caskets were transported by a long procession to a cemetery in Dien Chau district.

The parents of Hung were carried away from the burial on a motorbike, overcome with emotion and unable to watch. Those who stayed wailed as the coffins were lowered into the ground.

Their families have waited weeks for their bodies to come back, and took loans from the government to cover the cost of repatriation — $1,800 for ashes, or $2,900 for bodies.

Many families opted to pay more for the bodies so they could give their children traditional burials, since cremation is rare in rural Vietnam.

The tragedy has shone a grim light on the dangers of illegal migration into Britain, a top spot for many young Vietnamese hoping for better lives.

The majority of the victims discovered in the truck on October 23 were from central Vietnam, driven by a perceived lack of opportunity at home and helped by a sophisticated network of brokers.

Some families told AFP they borrowed tens of thousands of dollars to send their children to Europe.

They spent several thousand more to secure a spot on the truck, promised by brokers as the safer route into Britain, where many Vietnamese end up working illegally in nail salons or on cannabis farms.

Speaking at a packed memorial service for Hung and Tiep on Thursday, priest Phan Sy Phuong said the tragedy was a lesson.

“Your death may be a warning to young people, to our children, who because of poverty think they have to leave their homeland,” he told the crowd, some of whom fainted as the caskets were carried in.

“The death of 39 people may save many others… your deaths will not be meaningless,” he said.

Most of the victims came from just a handful of central provinces in Vietnam, where incomes sag beneath the national average and many people work as fishermen, farmers or factory workers.

Ten of the victims came from Ha Tinh province, where a massive toxic dump in 2016 killed tonnes of fish, decimating livelihoods and sparking an uptick in illegal migration, according to experts.

“I’m very sad to have to bury my own son,” Vo Van Binh told AFP from his bare home in Ha Tinh, surrounded by mourning relatives.

“I wanted to bring him back in full so I could see his face one last time,” he said of his 25-year-old son Vo Van Linh, who was sent abroad in search of a good job.

He was among 16 victims whose bodies arrived in Vietnam on Wednesday. The rest of the remains are expected later this week.

Vietnam has arrested at least 10 people in connection with the tragedy for people smuggling, though none have been formally charged.

Several people have also been arrested in Britain, including the 25-year-old driver of the truck Maurice Robinson, who pleaded guilty to conspiring to assist illegal immigration in court this week.