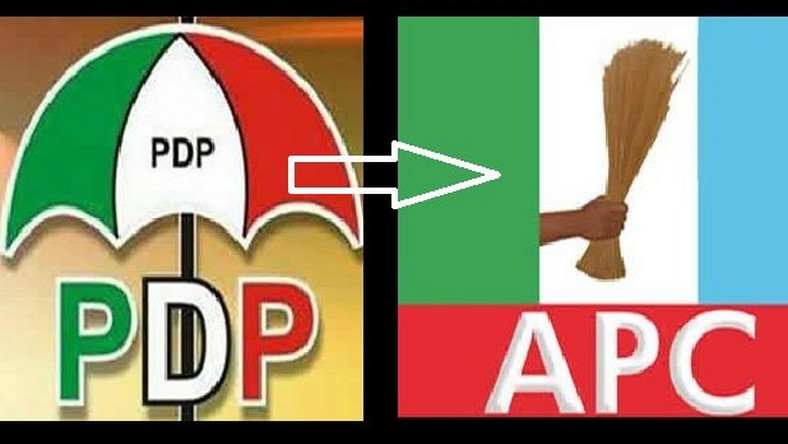 No fewer than 500 card-carrying members of People Democratic Party in Ekiti State including seven serving local government chairmen and 42 Councilors elected on the party’s platform have defected to the All Progressives Congress (APC).

The defectors with their supporters were on Friday received by Governor Kayode Fayemi into the ruling APC fold at a rally held at the popular Fajuyi Pavilion.

The local government chairmen, who defected to APC along with their supporters, said they dumped PDP because the opposition party cannot add value to the lives of Ekiti residents.

They described Fayemi as a true leader who plays inclusive politics and never victimised them since coming to power last year.

The Vice chairmen and councilors in the seven councils also defected to APC just as some commercial motorcyclists and mining association members formally joined the party.

They defectors who addressed the gathering one after the other promised to work hard for their new party in future elections.

They expressed gratitude to Fayemi for restoring them back to office after they were removed from office by the immediate past Assembly, a development they said had not happened in the history of the state.

One of the defectors, Okeya described Fayemi as “a real leader and a bridge builder who will go far in the politics of the country.”

Another decampee, Aladegbami said Fayemi has set a record in ensuring harmonious relationship between opposition parties and never deceived or coerced them to join APC.

He described Fayemi as a promise keeper who is passionate about the development of Ekiti and better welfare for its people.

While receiving the new members, the party chairman, Barr Omotoso, who described them as great assets promised that they would not be discriminated against as they will enjoy same privileges with old members.

He said: “Nobody is a latecomer in our party; we are ready to accommodate you.

“You have seen the light and you will never go back to darkness again and together, we will move Ekiti forward

“I want to say that our doors are still open to those who are still in opposition to join us, come over to APC the party of the people.”

Omotoso said APC would give them a better platform to contribute to Ekiti development, urging them to join hands with Governor Fayemi in taking the Ekiti to purposeful pedestal.