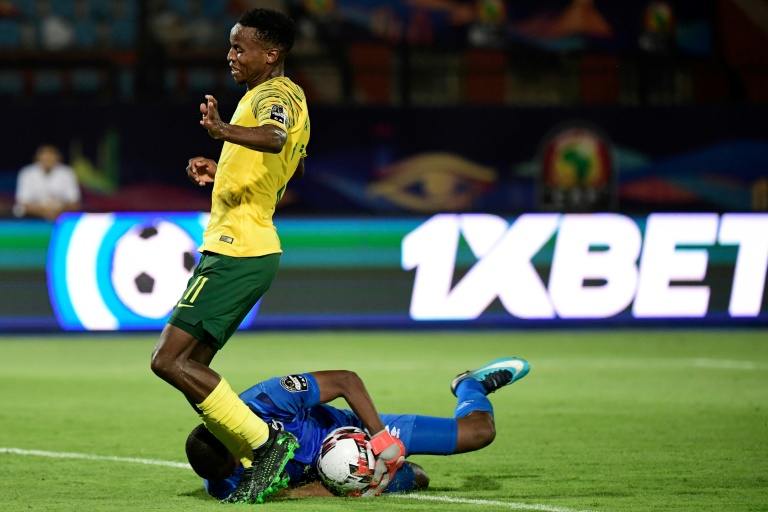 Pretoria-based 2016 African champions Sundowns turn 50 next year while Stellenbosch, who hail from a western Cape rugby stronghold, are halfway through a first season of elite football.

Bottom club Stellenbosch rocked nine-time champions Sundowns by taking the lead on 35 minutes in Pretoria via a Ryan Moon header that Zambian goalkeeper Kennedy Mweene should have saved.

Sundowns levelled after 57 minutes when Themba Zwane converted a penalty that should not have been awarded as big screen replays confirmed the scorer dived to win the spot-kick.

The referee had a clear view of the penalty incident and if Sundowns were lucky then, they were unlucky later when a deliberate Stellenbosch hand-ball in the box went unpunished.

On an off-night for the match officials, a Stellenbosch player was judged offside before crossing into the Sundowns’ half of the pitch.

Stellenbosch were reduced to 10 men on 73 minutes when a crude challenge by captain Mogamad de Goede brought a straight red card while his victim, Rivaldo Coetzee, was stretchered off.

Sundowns went ahead five minutes from time when a brilliant Zwane pass set up Sphelele Mkhulise to score and a stoppage-time goal from Matlala Makgalwa sealed victory.

“They tried to kick us off the park,” fumed 2016 CAF Champions League-winning coach Mosimane, referring to the no-nonsense but generally fair approach of his rivals.

“We should have had a free-kick seconds before the penalty that never was, and there were several other strange decisions that went against us,” lamented Barker.

Sundowns remain third after 14 rounds, beneath SuperSport United on goal difference and 10 points behind leaders Kaizer Chiefs with one match in hand.

In rain-lashed Durban, Bidvest Wits climbed four places to fifth thanks to a 1-0 win at fourth-place Golden Arrows through a 33rd-minute penalty won and converted by Gift Motupa.

Zimbabwean Knox Mutizwa squandered a second-half chance to equalise on a barely playable pitch when his penalty struck the post and went wide.