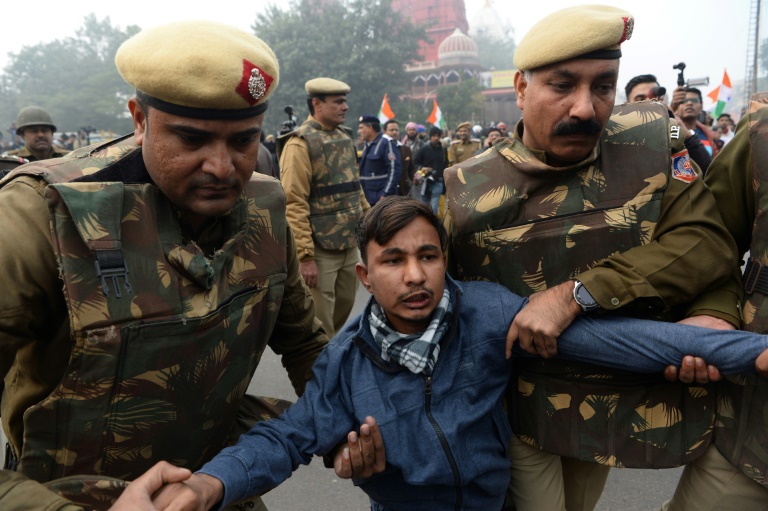 The protests were sparked by a new law easing citizenship rules for people fleeing persecution from three neighbouring countries, but not Muslims, stoking accusations at home and abroad that Modi wants to reshape India as a Hindu nation, something he denies.

Seven months after Modi swept to a second term, the past week has seen six people killed, dozens injured and on Thursday, authorities banned gatherings across swathes of the world’s biggest democracy that together are home to hundreds of millions of people.

They included all of Uttar Pradesh and Bangalore, areas of the northeast and parts of Bihar, New Delhi, Hyderabad and Chennai. All of them have seen protests in recent days, and in the case of the capital, riots and police storming a university.

“We are trying to control the situation. People have been asked to return to their homes,” Prasad said.

As others ignored the assembly bans in Delhi and elsewhere, authorities ordered telecom firms to cut calls, text messages and data in parts of the city.

India is already the world leader in cutting the internet, activists say, and access was also restricted in parts of the northeast and in Uttar Pradesh, home to a large Muslim minority.

In Bangalore, one of those dragged onto a police bus was globally renowned historian Ramachandra Guha, while in Delhi, Harsh Mander, a prominent rights activist, was also detained.

In the northeast, where the protests began last week — albeit for different reasons — around 20,000 people took to the streets in different locations. No violence was reported, however, after last week’s deadly clashes.

But the day’s biggest demonstration so far took place in Malegaon in Maharashtra state — no assembly ban was in place — with as many as 60,000 people, police said.

In Mumbai, a crowd of thousands including tattooed students and older Muslim men wearing skullcaps brandished Indian flags, posters of Mahatma Gandhi and handed out copies of the constitution.

“We cannot stay silent or on the fringes anymore. We have to act now,” financial advisor Aman Verma told AFP.

“Something has changed. This is the first time in a long time that people in Mumbai have come out in such large numbers to register dissent,” said consultant Karishma V.

The crowd in Kolkata was estimated at more than 40,000.

The protests have been fuelled by anger about alleged police brutality including at a university in Delhi on Sunday night.

Security forces in the capital have fired some 450 tear gas shells in the past five days, the Hindustan Times daily reported. One student reportedly lost an eye.

The demonstrations in the city have at times turned violent with vehicles set on fire and protestors hurling stones at police in heavily Muslim parts on Wednesday.

“If they show us the lathi (police baton), we will show them roses,” a student in Delhi, Shivanji, told AFP as she handed flowers to police on Thursday.

With international concern about the situation growing, Modi has insisted that his government does not aim to marginalise Muslims, tweeting this week that the new law “does not affect any citizen of India of any religion”.

But many in India’s 200-million-strong Muslim minority fear that they will be the main target of Modi’s plans to implement a national “register of citizens” to remove all “infiltrators” by 2024.