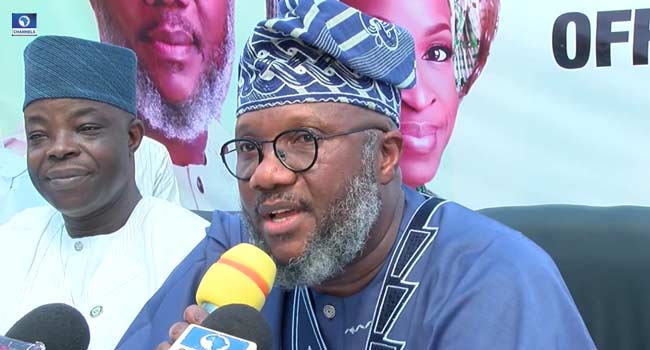 Four days after the governorship candidate of the Allied People’s Movement (APM) in Ogun, Hon. Adekunle Akinlade, announced hisreturn to the All Progressives Congress (APC), buses branded ‘2023’ with his image have surfaced.

The vehicles were sighted in different areas across the state.

The Supreme Court had, on December 18, dismissed Akinlade’s petition, challenging the election of Governor Dapo Abiodun.

Less than one week later, Akinlade, in company of his deputy governorship candidate, Adepeju Adebajo, announced that he was leading his people back to the APC.

He explained that his decision was to re-join and support party stalwart and former Governor Ibikunle Amosun.

In a statement on Friday by his media aide, Alao Azeez Adelani, Akinlade dissociated himself from any campaign publicity.

It read: “Our attention has been drawn to a malicious information orchestrated and peddled around to mislead the general public that Allied People’s Movement (APM) buses have been rebranded to signify Hon. Adekunle Akinlade’s campaign interest for 2023 guber race.

“We wish to state unequivocally that upon Allied People’s Movement loyalists return to All Progressives Congress on Monday 23rd December, 2019, all APM properties including campaign buses are scheduled for rebrand and this will commence soon.

“We hereby implore the general public to disregard the circulated pictures of rebranded buses indicating Hon. Adekunle Akinlade’s interest in 2023 as it is designed to cause disaffection, confusions and heat up the polity.

“Finally, we appeal to the good people of Ogun state and all our supporters to await further directive on the rebranding.”

APC National Chairman, Adams Oshiomhole, had hailed the return of Akinlade to the ruling platform.

He said: “We are glad that the National Reconciliation Committee (NRC) set up recently by the party is yielding fruits. We welcome these party men and women to this progressive governance which the APC promised Nigerians.”

However, DAILY POST gathered that Akinlade may in fact contest against incumbent Abiodun at the primaries to usher in the 2023 polls.

It is no secret that his godfather, Amosun, has what could be described as unfettered access to President Muhammadu Buhari and could succeed in making a good case for his protege ahead of the next general election.

The 2019 battle was between Vice President, Yemi Osinbajo and Amosun but the former had the upper hand as his candidate, Abiodun, was declared the party’s flagbearer.

After his emergence, Amosun accused Oshiomhole of carrying out the directives and wishes of some persons, a veil allusion to the VP.

Up till now, the two leaders are yet to reconcile and the party chapter remains sharply divided with each faction loyal to either men.

A source narrated to THISDA how Osinbajo, a few weeks to the election, lamented Amosun’s disregard for him, especially nominations for both selective and elective positions.

In October 2018, Abiodun made revelations on his face-off with Amosun, the serving Senator for Ogun Central District.

Abiodun recalled that after he lost the 2015 Ogun East senatorial election to Senator Buruji Kashamu of the People’s Democratic Party (PDP), Amosun promised to forward his name to Buhari for a ministerial slot to compensate for his contributions to federal and state campaigns.

“At this time, his (Amosun’s governorship) election was two weeks away. I asked him what he would give House of Assembly candidates to assist their campaigns as well as to help him mobilize the grassroots for victory. We have 11 Assembly positions in my district.

“Amosun replied that he would send them N1million each. I protested. I told him that would not achieve anything but he didn’t listen. I personally gave those 11 candidates N10million each.

“Then I, despite losing my own election, I personally gave Amosun $1million which was N220m then. We were up against a powerful PDP and I didn’t want APC to be disgraced.”

But with the happenings in the Presidential Villa and alleged reduction of Osinbajo’s powers and influence, Abiodun may be consumed if the President decides to back Amosun.

Amosun’s friendship with Buhari dates back to the since the years of the defunct All Nigeria People’s Party (ANPP) and Congress for Progressive Change (CPC).

He is considered one of the luckiest persons close to the president, having been able to secure many appointment slots.

Adewale Ogunyomade, his ex-Special Adviser for Rural Development, was just two weeks ago appointed into the new board of the Federal Inland Revenue Service (FIRS) to represent the South-West.

Amosun’s former Commissioner for Works and Infrastructure, Olamilekan Adegbite, is the current Minister of Mines and Steel Development.

His erstwhile Commissioner for Special Duties and InterGovernmental Affairs, Adeleke Adewolu, is the Executive Commissioner, Stakeholder Engagement, at the Nigeria Communications Commission (NCC).

Meanwhile, the APC in Ogun, have kicked against Akinlade’s come back.

Its Publicity Secretary, Tunji Oladunjoye, said there is a process of joining or returning to the party and must be in accordance with the its constitution and established procedures.

“We urge them to return to their various wards for registration and realignment”, the spokesman he noted.

“It is also important for them to abide by the prevailing peace in Ogun APC and work under the Caretaker Executive formed by the National Working Committee and led by Chief Yemi Sanusi”.