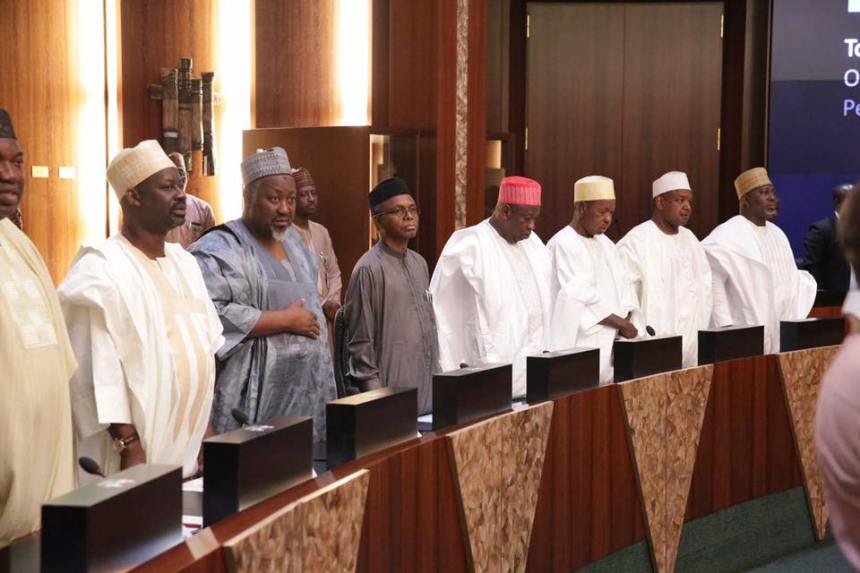 The list of governors pummeling critics in their states is growing by the day. These governors, who are averse to opposition, have been using security agents to silence and oppress opponents. State laws are also being misapplied to actualise their evil plans. We are at a level where governors order arrest of opponents and charge them for treason, a federal offence. Nigerian human rights activists will have to start staging state-specific protests against these intolerant rulers from hell. The Zamfara State Governor, Bello Matawalle has surprisingly joined the inglorious club. Few weeks ago, the Publicity Secretary of the All Progressives Congress in the state, Ibrahim Danmalikin-Gidangoga was dragged to a Shari’a Court in Gusau, for “defaming Matawalle and inciting public disturbance, actions contrary to sections 287 and 142 of the Shari’a Penal Code.” Gidangoga was surprisingly charged under the Shari’a Penal Code. Matawalle got angry because Gidangoga held a press conference and raised pertinent questions about some of the actions and inactions of his government. This governor subsequently got security agents to “take action” against the Zamfara APC spokesman. As at press time, the Zamfara APC spokesman was still in jail.

In Bauchi State, Governor Bala Mohammed recently motivated the arrest of an opposition politician, Umar Mai-Fata, over “injurious and false accusation” against him. He is being held in a correctional facility in Bauchi, while his trial was adjourned. The detainee had claimed that Governor Mohammed took N1 billion from the state government’s coffers to fund the November 16 Bayelsa governorship poll where he served as the Chairman of the PDP campaign committee. Governor Mohammed should have sued Mai-Fata for libel instead of this illegal arrest and detention.

Governor Udom Emmanuel of Akwa Ibom State is also fast becoming a bully. 21-year-old Michael Itok was thrown into prison on October 8, over “injurious Facebook posts” against Udom. He was charged under Section 6 of the state’s Internal Security, for “activities that constitute a nuisance.” The governor considers some of his Facebook posts a nuisance. Governor Emmanuel is the complainant in the case. Itok was arraigned on November 26 at a Magistrate’s Court by the Akwa Ibom Ministry of Justice, based on an investigation by the DSS. The accused was taken back to prison because the court lacks the competent jurisdiction to hear the charge. His file was returned to the Akwa Ibom DPP. Luckily, Itok is now out on bail while the case continues later this month.

Governor Ben Ayade of Cross Rivers State is also averse to criticisms. He rules the state with an iron fist. Ayade is always very ruthless when confronted with facts and figures showing his failings. He is persistently intimidating his perceived opponents with security agents. Last August, Ayade bared his fangs at the publisher of CrossRiverWatch, Agba Jalingo, for reporting that he “diverted N500 million meant for the state’s micro finance bank.” This governor mobilised the Cross Rivers State Police Command to Lagos to abduct Jalingo at home. Ayade is very good at using the police to terrorise innocent people. Now, Agba Jalingo is on trial for treason for criticising Ayade. He was remanded at the Calabar prison, after Justice Simon Amobeda of the Federal High Court, Calabar, denied him bail. Amobeda eventually announced his withdrawal from the case after a secret recording, where he allegedly made some biased remarks against Jalingo, was leaked to the press.

Apart from Jalingo, another critic of Ayade, Joseph Odok, is also languishing in Calabar prison. Odok, a lawyer, was arrested on September 26 in Abuja and taken to Calabar where he is facing terrorism charges. Ayade instigated his arrest and incarceration because of Odok’s constant criticism of his government.

In Niger State, Governor Sani Bello got activist Abubakar Katcha arrested and arraigned before a Magistrate for criticizing him. The governor’s chief of staff petitioned the police, alleging that Katcha posted criticism of his principal on his Facebook page. Katcha accused the governor on Facebook of diverting public funds to private use amidst decaying road infrastructure in the state. The police said Katcha’s Facebook postings could “incite the public.” Interestingly, Katcha and Bello were erstwhile political allies, and once served in the same cabinet as commissioners in Niger State. They are also members of the ruling APC, with Katcha currently serving as a board member of the National Film and Video Censors Board.

For me, equating criticism of government, policies and politicians with treason is bizarre and draconian. This baloney has to stop. Affected governors must be compelled to instantly and unreservedly release all those in jail for criticising them. The likes of Agba Jalingo are demanding accountability from these governors. If any governor is aggrieved by a publication, I expect him to file for libel. Abducting people and locking them indefinitely is lawlessness. These governors need to be reminded that they are public officers and must learn to be tolerant of criticism which is a necessity in free societies. All forces of good must mount pressure on affected governors to free the critics they are holding. Today, I urge the Acting IG Muhammed Adamu, to reprimand the then Commissioner of Police, Cross River State Command, Austin Agbonlahor, for allowing Ayade to use him to abduct Jalingo. Agbonlahor is now an AIG.

Lagos Pension for Ex-Govs Most Reprehensible
As we go into the New Year, civil society groups must mount pressure on Lagos law makers to abrogate the atrocious pension law that grants huge state resources to its ex-governors. The Lagos State pension law grants a former governor two posh houses – one in Lagos and another in Abuja – at an estimated cost of about N3 billion at current cost. A former governor also gets six new cars replaceable every three years. In nine years, a former governor would have had 18 new cars delivered to him. What a country! These former governors get additional N2.5 million as monthly pension (N30 million annually).

They and their immediate families also enjoy security details, free medicals and domestic staff provided by the government. They are getting all these in a state where public schools, hospitals and inner roads are in shambles. This garbage must end this year. In this Lagos, conservatively, 95 per cent of inner roads are in a big mess. Also, majority of Lagosians lack access to public water supply, yet huge funds are going into maintaining ex-governors. Civil servants, after serving the state for 35 years don’t get ordinary tent built for them. Some of these pensioners are even struggling to get their annuity after 35 years of service. Pressure groups must rise and fight for the abrogation of this loathsome Lagos Pension law. The Lagos State House of Assembly is an accessory to this crime. However, with good pressure, I am very sure these lawmakers will budge. They must emulate their colleagues in Zamfara State who have since thrown away the rubbish called pension for ex-governors.

Akwa Ibom is another State whose pension law for ex-governors is as obnoxious as that of Lagos State. Pressure must also be mounted to ensure that it is repealed. Here, the law provides for N200 million annual pay for every ex-governor. They enjoy a pension for life at a rate equivalent to the salary of the incumbent governor. A new official car and a utility vehicle every four years; one personal aide and provision of adequate security; a cook, chauffeurs and security guards are provided for the ex-governors at a sum not exceeding N5 million per month. There are also free medical services for the ex-governors and their spouses at an amount not exceeding N100 million yearly. Also, a five-bedroom mansion is built in Abuja and Akwa Ibom for ex-governors.

NBA, FG and the Rule of Law
The New Year dispatch of the Nigerian Bar Association chastising the Buhari government for its persistent abuse of the rule of law is quite commendable. Yes, this government has been obstinately assaulting the rule of law through its misbehaviours and highhandedness and the NBA is right to demand strict adherence to rule of law in the New Year.

The NBA remarked: “In 2020, the Nigerian Bar Association will continue to speak for Nigerians. We will persist in holding governments to account, particularly as it relates to the promotion and protection of the rule of law and the delivery of democracy dividends to our people.

“2019 marked the year that removal of public officers through nebulous and reprehensible ex-parte orders of the Code of Conduct Tribunal gradually became the norm in our national life.

“It started with the removal of erstwhile Chief Justice of Nigeria, Honorable Mr. Justice Walter Onnoghen, GCON through a purported CCT ex-parte order in the first quarter of 2019 and, towards the end of the year, this abnormality was repeated with the removal from office of the Acting Registrar-General of the Corporate Affairs Commission, Lady Azuka Azinge through a questionable ex-parte order.

“This is one ‘innovation’ in our national life that does not bode well for the security of tenure of our public officers. This new practice of tripping and removing our public officers through contrived CCT ex-parte orders corrodes confidence in the system. It not only assaults our collective sensibilities when CCT ex-parte orders are used to ease out public officers but erodes due process, a fundamental plank of the rule of law.”
In this New Year, the NBA and other civil society organisations must come together to fashion out proactive steps that will compel the Buhari government to respect this fundamental part of our constitution.

Our Quivering Refineries
One of the campaign promises of President Muhammadu Buhari was that our refineries will work. It’s a shame that almost five years after his assumption of office, the refineries lay prostrate. The Warri Refining and Petrochemical Company, Port Harcourt Refining Company and Kaduna Refining and Petrochemical Company are gasping for breath. The latest report on the consolidated operations of the refineries showed that they were dormant for three consecutive months in 2019 – July, August and September – as they processed no drop of crude oil.

In terms of their consolidated financial performance, the facilities consistently posted losses for 13 straight months since September 2018. The highest single consolidated loss posted by the refineries during the 13-month period was recorded in June 2019, when the facilities lost N17.4bn. The four state-owned refineries posted a cumulative loss of N114.3 billion in the first 11 months of 2018. Just like his predecessor, Buhari has simply been funding inefficiency. The plants never operated optimally under former President Jonathan. Under Buhari, with all his showboating, they nosedived further, with performance at abysmal levels. As a result, huge state resources are expended annually on the importation of refined petroleum products by this crude-oil producing country called Nigeria.

Yearly, payments for petrol subsidy eat a large chunk of our budget because the imported products are sold at subsidized price. In December last year alone, N55.58 billion went into the payment of petrol subsidy by the federal government. N450 billion is set aside in budget 2020 for this incongruity called petrol subsidy payment. What a country. Just imagine what this colossal amount would do for the country’s dilapidated hospital, schools and roads. The refineries are not working; yet, billions of USD goes into turn around maintenance. It’s about time these money guzzling plants are sold. This is the only way forward for beloved Nigeria.