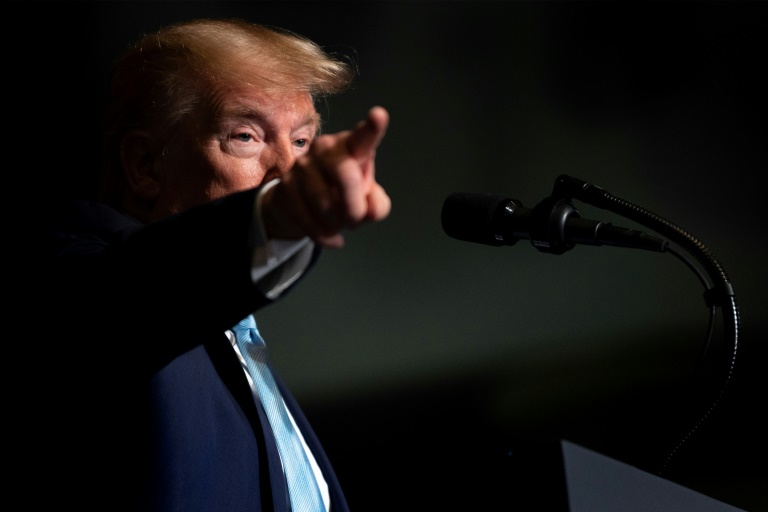 US President Donald Trump threatened “major retaliation” Sunday if Iran avenges the killing of a key military commander and he warned of massive economic sanctions against ally Iraq if the country expels US troops based there.

The twin threats came as Iran announced it was further reducing compliance with a tattered international nuclear accord, ending limitations on numbers of centrifuges used to enrich uranium.

The latest blow to the accord, which was meant to ensure Iran did not develop a nuclear weapon under cover of its nuclear industry, deepened the regional crisis set off by Friday’s killing of Iranian general Qasem Soleimani in Baghdad.

Trump ordered a US drone to fire a missile at Soleimani, one of the most influential people in Iran’s government, when he was near the Iraqi capital’s international airport.

Angry, black-clad mourners thronged the streets of Iran’s second city Mashhad on Sunday to pay last respects to the remains of Soleimani and chant “death to America.”

Trump bluntly warned Iran against taking vengeance, repeating his insistence that US bombing targets could include Iran’s cultural heritage sites. Critics say that would qualify as a war crime under international law.

“If they do anything there will be major retaliation,” Trump told reporters on Air Force One, as he flew back to Washington — and a looming Senate impeachment trial — from vacation in Florida.

Trump had already threatened bombing of 52 unspecified targets in Iran if Tehran attacks US troops and interests in the region.

In his latest comments, he was adamant that targets could include places of cultural significance in a country boasting an ancient heritage and two dozen UNESCO-listed sites.

The situation in neighboring Iraq, a US ally, also deteriorated, with the future of some 5,200 American soldiers there in doubt.

Many Iraqis have expressed outrage over the killing of Soleimani, who masterminded deep Iranian influence in the country. A top Iraqi military figure Abu Mahdi al-Muhandis was killed in the same US strike.

In Baghdad, unidentified attackers launched a pair of rockets Sunday, hitting near the US embassy in the high-security Green Zone for the second night in a row. That was just hours after Iraq’s foreign ministry summoned the American ambassador over the drone strike.

And Iraq’s parliament voted to request the government end an agreement with a US-led international coalition to fight the hardline Islamist group IS in the region.

If the government agreed, that would effectively require the departure of US soldiers supporting the local troops in the anti-IS fight.

Caretaker prime minister Adel Abdel Mahdi, who called the US drone strike a “political assassination,” indicated he would back the troops’ ouster. He said the choices were immediate expulsion or withdrawal under a timeframe.

Trump told reporters that a forced departure of US troops would prompt sanctions even worse than those already imposed, to devastating effect, on Iran’s economy.

“If they do ask us to leave — if we don’t do it in a very friendly basis — we will charge them sanctions like they’ve never seen before,” Trump said.

Trump said the main US base in Iraq was “very extraordinarily expensive.”

“We’re not leaving unless they pay us back for it,” he said.

Earlier, US Secretary of State Mike Pompeo sounded a softer note, saying “the Iraqi people want the United States to continue to be there to fight the counterterror campaign.”

Soleimani was one of Iran’s most popular public figures, seen as a hero of the 1980-88 Iran-Iraq war.

He was also the key figure behind Iran’s effective network of proxy militias and alliances across a region where Iran is in often deadly rivalry with US allies Israel and Saudi Arabia.

What that will look like is the subject of heated speculation in the Pentagon and the White House. Analysts say Iran may be limited in its room for maneuver if it wants to avoid full war with the far more powerful United States.

But a former head of Iran’s Revolutionary Guards threatened on Sunday to turn the Israeli cities of Haifa and Tel Aviv “to dust” if the US attacks targets in Iran.

And Khamenei’s military adviser, Brigadier General Hossein Dehghan, told CNN that Iran’s response to the assassination “for sure will be military and against military sites.”

The crisis comes as Trump is embroiled in his own domestic political turmoil. He was impeached by the House of Representatives for abuse of office and obstruction of Congress.

The Senate, where his Republican party has a commanding majority, is wrangling over when and how a trial will take place, as the clock ticks down on the November presidential elections.