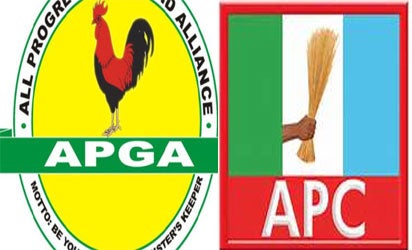 Onuoha who was also the APGA Senatorial candidate for Abia North district during the February 23 national Assembly election, attributed his decision, to the irresolvable internal squabbles rocking the national and Abia chapter of the party,APGA.

Orji Kalu polled a total 31,203 votes to defeat Senator Mao Ohuabunwa, who polled 20,801 votes and the candidate of the All Progressive Grand Alliance, Chief David Ogba, who scored 11,410 votes.

However, confirming his defection to the All Progressives Congress(APC), in a telephone interview on Tuesday, Chief Onuoha, expressed delight that he would help to contribute his quota so as to help the party(APC), bring the desired change that Abians need, and make Nigeria a better country.

The frontline politician said, “Yes, I have joined the APC with thousands of my supporters cut across the five local government areas in Abia North Senatorial zone.Together, we will contribute immensely to ensure we take Abia and Nigeria as a whole to the next level agenda of development”.