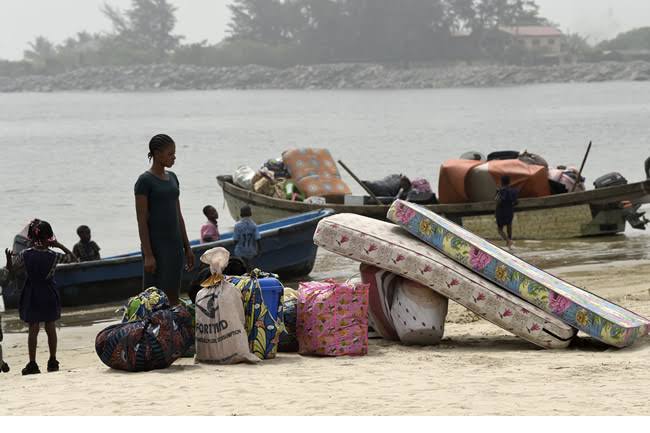 The joint task force against pipeline vandalism and crude oil theft, comprising the Nigerian Navy, Nigerian Army, Nigerian AirForce, police and even the Nigeria Security and Civil Defence Corps (NSCDC), recently drew the ire of civil society and non governmental organisations, including human rights body, Amnesty International, for evicting the residents of Tarkwa Bay, one of the many islands that dot Lagos.

On January 21, 2020, residents of Tarkwa Bay, a waterfront community near the Lagos harbour, were evicted by security operatives and their make shift homes demolished. Purportedly housing about 10,000 people, the residents lamented that they were given chase by bulldozers, which afterwards demolished their homes in minutes.

While the operatives maintained that the residents had been given three months notice, the latter claimed otherwise. According to some of them, they were given hours to pack, which necessitated some of them leaving their belongings behind as they fled to safety. Some of them told THISDAY that they loaded true belongings, the much they could, into their boats and sailed around hoping that it was a dream.

Refuge at Inner Islands
As the ultimatum issued by the military to the evicted residents to evacuate all their belongings from Tarkwa-Bay Island elapsed by 2pm of Friday, January 24, 2020, majority of the residents of the Island took refuge at other inner Islands, away from Tarkwa-Bay.

THISDAY who was on the Island to observe the situation of things at the expiration of the ultimatum, gathered that most of the residents had taken refuge majorly at inner islands that dot Tarkwa Bay. Some of these islands include Manager Island, Sam Okoji Island, and New Village Island, which are inner Islands to Tarkwa Bay Island.

In a journey that took about 30 minutes on water before arriving the Island, THISDAY also observed that the residents were ferrying their properties to other locations. Some who spoke on anonymity said others who decided not to move with them, left for Apapa and some Ikorodu, while there were yet others who went to squat with relations in different parts of the state.

Accusations of Pipeline Vandalism
On what could be the cause of the eviction, THISDAY gathered from a top authority, who spoke off-records, that the Island dwellers were notorious for oil bunkering, and pipeline vandalism.

“They went as far as not just vandalising pipelines which was passed across the island, they connected pipes to the pipeline and channeled it to their respective homes. From their homes, they had specific taps where they fetch fuel from as if they were fetching water. They then would load the jerrycans filled with fuel to black markets and sell.

“This act has been ongoing for years. But eventually, the government has finally decided to arrest the situation after another act of vandalism recent discovered again, and the whole world are showing sympathy to them without bothering to ask what they have done.”

To give credence to the accusation, at Tarkwa Bay, manholes filled with vandalised PMS littered the white sands. It was further gathered that prior to digging the manholes, the vandals first vandalised one of the pipelines belonging to the Nigerian National Petroleum Corporation (NNPC). With the products from the vandalised pipelines seeping into the ground, it then runs into the already laid pipes underground to dug manholes, which acts as a crude storage, before the vandals scoop it into jerrycans for onward transportation to the end buyers.

During the operation at Tarkwa Bay, the taskforce also destroyed illegal structures on the pipeline’s right of way that were constructed by the vandals to enable them easily access the manholes. Since that operation, the JTF has carried out more raids, discovered more illegal holes and destroyed more shanties.

Taskforce’s Stance
Reacting to the hullabaloo the eviction of the residents caused, the Flag Officer Commanding (FOC), Western Naval Command, Rear Admiral Oladele Daji, who also doubles as the Operational Command Officer for Operation AWATSE, an internal security operation covering Lagos and Ogun States to specifically combat scourge of pipeline vandalism and oil theft, said the accusation of illegality against the taskforce was an attempt to blackmail them.

He said: “There has been some attempt by some criminally minded individuals to blackmail Operation AWATSE in the efforts to clear the NNPC rights of way of all illegal structures as directed by the Chief of Defence Staff. We feel the need to let the world know the kind of criminalities that are taking place around the NNPC pipeline right of way, and also at the strategic storage facility of the NNPC, so that the world and good people of this country can judge by themselves.

“While Operation KURONBE, which is the ongoing operation, is different, after we face where we are now, we are entering the stabilisation phase, and that is to ensure sustenance of adequate presence; both at the waterfronts and also on the Island, so it would make it difficult for these criminal elements to gain a foothold on the Island.

“And I want to say that never again will we allow them to perpetuate the kind of economic sabotage that they are perpetuating in this area. Contrary to the news circulating, we are not dislodging them from the Island. If you come here, you will see beautiful beach houses, private homes that are built that are contributing to tourism, economy, and even legitimate means of employment for so many Nigerians.

“It’s just the few criminal elements that have thousands of jerricans stored in their backyards, that have wells dug in their compounds and concealed that are going to be removed from the entire Island.
The good and law-abiding citizens were advised to encouraged to go about their lawful businesses without any form of harassment and intimidation.

“And that is part of the rules of engagement and also the standard operating procedure for Operation KURONBE, and we sustained that and we ensured that even in the process of evicting the economic saboteurs, human rights would be upheld.

“You see, if one finger is dipped into oil, it’s likely to spoil other fingers. And while those presumably innocent saw all the activities that were going on, and partook in it, and refused to report to the appropriate government agencies, they are part and parcel of it.

“And that is what we don’t want to experience again; like the case of pipeline explosion at Abule-Egba. Innocent lives were lost. We don’t want to lose any innocent lives in this country because of the conspiracy and silence of a few people. And mind you, we gave them three months notice before embarking on this operation. The physical evidence that we have on the ground suggests that most of these criminally minded people are citizens of Ghana, Togo and Cameron.”

Despite the backlash by civil society organisations and non government organisations, the Lagos State government has said it is solidly behind the actions of the taskforce given the huge scale of economic sabotage being carried out on the island.

Also speaking, Director of Technical Services, Ministry of Physical Planning and Urban Development, Lagos State Government, Mr. Muritala Balogun, stressed that the Lagos State
government has not licensed anybody to occupy this place.

“So, all structures that you find here are all illegal structures. They never got any permit nor approval from Lagos State government. And on the insinuations that they have been residing here for over a hundred years, it cannot be true. I can recollect when I was still a young boy in primary school, apart from Tarkwa-Bay, there is a village called Ogogoro Village, the same incident happened. A particular government cleared that place back then.

“They were into piracy; killing captains of ships over the Nigerian waters. So the same thing is happening here. Government cannot fold its hands where illegal occupants are sabotaging the economy of Nigerians. Lagos State government would not be part of that.

“For the leisure centers, they have licenses. That was why they were not affected by the operations because they have our permits. But those without permits are the ones carrying out these illegal activities and those are the targets of government so they can stop sabotaging the economy.

“About other communities that have not been licensed, for Lagos State, we have a master plan that covers all parts of the state. Some of them are recognised in the master plan. But efforts are ongoing, encouraging them to come and submit application to government and get Lagos State permit, so that their stay on that land can be legalised. And we are fully in support with the ongoing operation.

“The statutory responsibility of the Lagos State government in this operation, is not for security; though it’s part of it, but for physical planning, we have our own responsibilities to grant permits for development and because of the terrain of this place, we know how we come around here. It’s not really easy to come over water for monitoring. But arising from what has happened now, government is putting itinerary in motion to ensure that there is compliance with the physical planning law, everywhere in the state now.

“For the people that were dislodged here, government still cares about them. They can raise representatives and make presentations to government because they don’t have permits to be here in the first place and Lagos State government doesn’t encourage illegality.”

AI Reacts
Sitting firmly on the side of the evictees, Amnesty International has condemned Nigerian authorities over the alleged violent and unlawful evictions that rendered thousands of residents of Tarkwa Bay, a waterfront community in Lagos State homeless.

Tasking the FG, LASG to end forced evictions in Tarkwa Bay, the human rights organisation said the security personnel raided the location on January 21, 2020, where they allegedly assaulted the residents while shooting during the eviction.

AI in a statement said the eviction was a brazen disregard for the safety and security of the affected people, as well as their right to housing among other human rights, adding that some children were reported missing.

“What is happening at Tarkwa Bay, Lagos is a violation of human rights. It is unacceptable that the Nigerian government are evicting people in the most violent manner and destroying their homes without genuine consultations, adequate notice, alternative accommodation or access to remedies,” said Osai Ojigho, Director Amnesty International Nigeria.

She said unlawful evictions had been going on in Lagos since last year, adding that in November 2019, nearly 1500 residents of Second Badagry community in Lagos were forcibly evicted. Similarly, on January 4, 2020, AI said about 3,000 residents of Okun Glass Village, Ilaase, were violently evicted.

“In defence, the government sited pipeline vandalisation as justification for the forced evictions. Several other informal communities in Lagos State live with perpetual threats of forced evictions. Many residents lament how forced evictions throw them and their families into destitution,” the statement added.

AI urged the Lagos State authorities and the federal government to urgently set up an independent and impartial inquiry into all cases of mass evictions in Lagos and prosecute all those, including government agents, found to be responsible for human rights violations and crimes committed during the evictions.

Given that the court is the final hope of the common man, the evictees stormed the court last Thursday to get an interim injunction, lamenting that they were being punished for the crimes of a small minority and given no notice of the eviction.

The judge issued an interim injunction ordering the authorities to stop the demolitions of homes, businesses and community facilities or evicting any more inhabitants and also forbade them from harassing people from the community.

With this recent operation by the JTF, it is hoped that they would not just stamp out the menace of pipeline vandalism in Tarkwa Bay, as well as protect the critical pipeline infrastructure across board, but at the same time respect the sanctity of human rights.