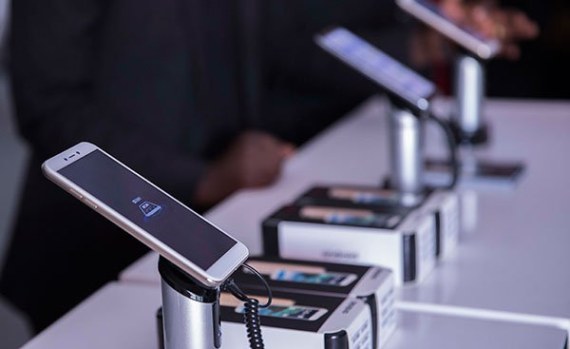 In a room, a team of workers, especially young women put electronics components on a motherboard as foreign expatriates supervise them.

This room, the Components Manufacturing System (CMS) as it is called in technical terms, is where most of the work to make a phone takes place.

Workers who operate at least eight hours per day spend time putting more than 700 components to produce a motherboard, which makes up 30 per cent of the smartphone.

These young people have been hired by Mara Phones and given six months training to produce Africa’s first smartphone.

They work across different parts of the production line, from producing the motherboard, to actual manufacturing and packaging.

“There is a lot of enthusiasm and determination to work here (at the plant),” a lady in her early 20’s tells me as we toured the factory along with a group of Rwanda’s development partners.

She’s one of the 60 per cent women who work here, and 90 per cent of youth hired to operate at the plant, most of whom graduated from different Integrated Polytechnic Regional Centres (IPRC) across the country.

Last year, investor Ashish Thakkar teamed up with the Government to set up Africa’s first smartphone factory in Rwanda at a tune of nearly $50 million, partly financed through the country’s largest commercial bank, Bank of Kigali.

It’s been four months down the road since the factory opened shop in Kigali at the Special Economic Zone, Gasabo District.

“We have been producing an average of about 10,000 (smartphones) per month based on demand,” Eddy Sebera, the company’s chief executive officer told The New Times in an interview on Wednesday.

That, he added, is based on market demand that is growing gradually.

As of last month, the firm says it has exported to 53 countries worldwide with Germany being their largest market outside Africa.

“We are not localizing ourselves just as an African (company) but we are also producing for the global market,” Sebera notes, arguing that they have created a name in a way that they are changing the narrative.

According to Mara Phone boss, changing narrative is currently the biggest task ahead of them. He doesn’t dismiss the idea that people are so comfortable owning the likes of iPhones, Samsung, Huawei and other Chinese affordable smartphones.

“The biggest problem we are facing is perception,” he says.

According to Counterpoint Research, Samsung still leads the global smartphone market, followed by Huawei and Apple in the third position. Chinese cheap smartphones like Xiaomi, RealMe, and Tecno dominates the list of the top ten global smartphone players.

The likes of Google Pixel doesn’t appear in the top ten list of smartphone market even with its efforts to push for gaining a portion of the global market.

MaraPhone will have to devise a strategy to appeal to consumers who are still obsessed with international brands.

The firm’s biggest market currently is in Africa where 60 per cent of their smartphones are sold. Yet, many ordinary Africans still think the price of a MaraPhone is high.

Currently, each of the Mara phone models (X and Z) costs about $190 and $200 respectively.

However, the company says it plans to produce cheaper smartphones that could retail somewhere between $60 and $70.

“This is not to compete with other products but to contribute and touch the grass roots with smart affordable phones,” Sebera says.

It has also entered asset financing agreement with Bank of Kigali to allow locals to easily acquire phones, which arguably, are not the most affordable on the market.

Sebera sees initiatives like the Connect Rwanda challenge as making significant contributions towards putting locally made in the hands of more Rwandans.

More than 46,000 smartphones have so far been pledged since the beginning of the campaign, with the majority being Mara phones.

Mara Phone is also eyeing the African Continental Free Trade Area agreement, which seeks to enable Africans and African firms to trade among themselves easily and make Africa the largest free trade area.

Currently, the company pays hefty duties to sell its smartphones across the continent – around 40 per cent.

Mara Phones has received incentives from the Government and it’s part of the higher aim by the country to support manufacturing and industrialization under the National Strategy for Transformation (NST1).

Under the strategy, the Government seeks to promote industrialization and attain a structural shift in the export base to high-value goods and services with the aim of growing exports by 17 per cent annually.

The strategy also seeks to promote the ‘Made in Rwanda’ brand working with the private sector to recapture at least $400 million of imports by 2024.

Mara Phone still imports most of its raw materials and they worry they may be hit by the impact of the global epidemic of Coronavirus, which the country’s traders and other people have already started feeling.

“Coronavirus will impact us all since we depend on China for some of our Raw materials,” Sebera says.

However, he adds, that they are working on alternative ways to source some of their materials from other locations in Asia, such as Turkey, Korea and Singapore.