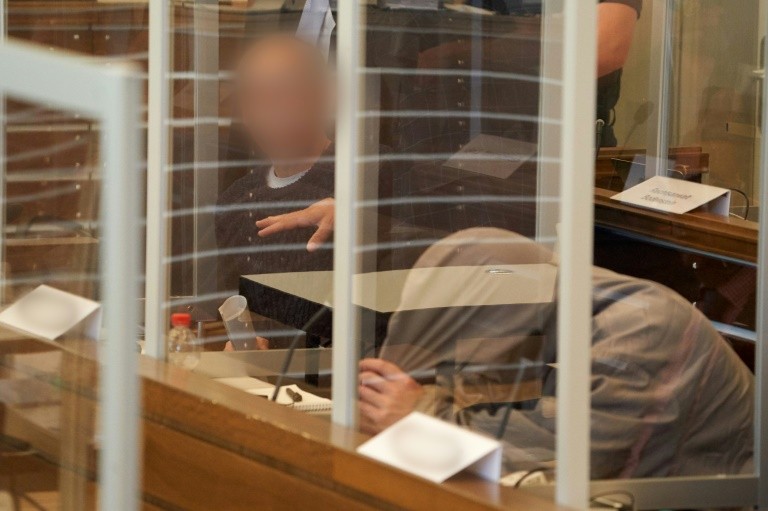 Prime suspect Anwar Raslan, an alleged former colonel in Syrian state security, stands accused of carrying out crimes against humanity while in charge of the Al-Khatib detention centre in Damascus.

The 57-year-old, who appeared in the dock wearing glasses and a moustache, is charged with overseeing the murder of 58 people and the torture of 4,000 others at the prison between April 29, 2011 and September 7, 2012.

Raslan remained expressionless as prosecutors listed the gruesome details of the torture he allegedly oversaw, which included “electric shocks”, beatings with “fists, wires and whips” and “sleep deprivation”.

Fellow defendant Eyad al-Gharib, 43, is accused of being an accomplice to crimes against humanity, having helped to arrest protesters and deliver them to Al-Khatib in the autumn of 2011. He appeared before the court in a hoodie, his face partially covered by a mask.

Like hundreds of thousands of other Syrians, the two men fled their country and applied for asylum in Germany, where they were arrested in February 2019.

They both declined to speak before the court, although Raslan’s lawyer said he would give a written statement shortly.

“This trial is the first occasion on which (victims) are speaking out –- not only in public, but before a court –- about what happened to them and what is still happening in Syria,” said Wolfgang Kaleck, founder of the European Center for Constitutional and Human Rights (ECCHR), a Berlin-based legal group supporting the plaintiffs.

Raslan and Gharib are being tried on the principle of universal jurisdiction, which allows a foreign country to prosecute crimes against humanity.

This is the only way to bring the perpetrators of Syrian state crimes to justice, as the International Criminal Court is hamstrung by vetoes from Russia and China, the ECCHR claimed.

“The case in Koblenz should serve as a stark warning to those who are currently committing abuses in Syria that no one is beyond the reach of justice,” Human Rights Watch said in a statement.

During the trial, held under high security and due to last until at least August, the court is expected to hear testimony from victims who survived imprisonment at Al-Khatib, before later escaping to Europe.

On Thursday, the court heard an account of the appalling horrors suffered by 24 former Al-Khatib inmates, many of whom were arrested for taking part in pro-democracy demonstrations during the Arab Spring in 2011.

Speaking from behind a sheet of plexiglass due to the coronavirus pandemic, public prosecutor Jasper Klinge said Raslan “knew the extent of the torture” which took place in order to extract “confessions and information about the (Syrian) opposition”.

He said prisoners were murdered “under (Raslan’s) direction and responsibility” and described “inhumane” conditions, with 140 people crammed into cells of just 50 square metres in “incredible heat”.

The prosecutor also referred to a woman who was subjected to electric shocks and raped during interrogation after her arrest in Damascus in May 2011.

Several co-plaintiffs in the trial expressed their hope of finally seeing justice for such crimes.

“It’s the first time I have experienced a fair trial. We want to reveal the truth about torture in Syria, which is still going on today,” said former Al-Khatib prisoner Hussein Ghrer.

“This trial is also important for those who are still in prison or who have died, in order to restore their dignity,” added fellow victim Wassim Mukdad.

Some have suggested that Raslan, who faces life imprisonment if convicted, was not just a pawn of the regime, noting that he reportedly defected to the opposition in 2012 before arriving in Germany two years later.

Yet ECCHR’s Kaleck insists that he was not “any old prison guard”, but rather someone who, according to prosecutors, had a position of authority in the apparatus of the Syrian state.

According to the UK-based Syrian Observatory for Human Rights monitoring group, at least 60,000 people have been killed under torture or as a result of the terrible conditions in Assad’s detention centres.