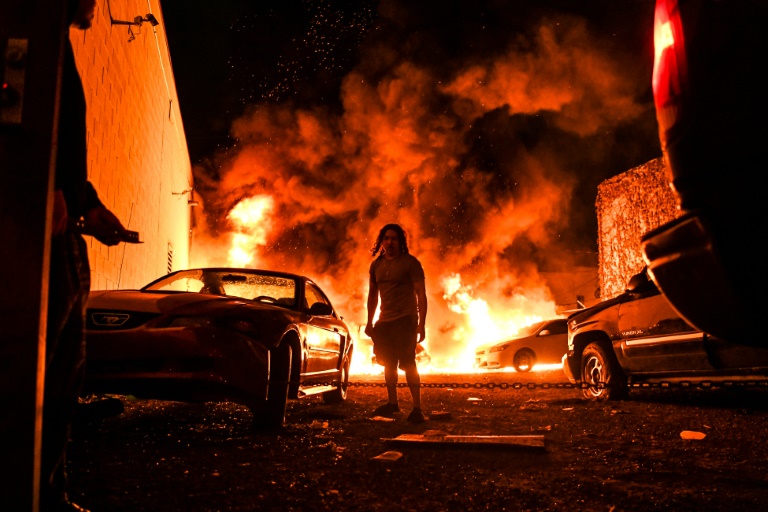 Minnesota’s governor called up more national guard troops Saturday and warned they would “decimate” rioters after a fresh night of violence in Minneapolis overwhelmed law enforcement and protests against police brutality spread across America.

Officials in more than a dozen cities braced for more unrest as the protests sparked by the death of George Floyd in Minneapolis police hands this week sparked outrage over police mistreatment of African Americans.

It was one of the worst nights of civil unrest in the United States in decades.

Police cars and other property were set alight and destroyed in New York, Dallas, Atlanta and elsewhere, and protestors shouted and chanted for hours outside the White House in Washington, as President Donald Trump sat inside.

– Federal troops could be called –

Governor Tim Walz said he was mobilizing the entire 13,000-strong Minnesota National Guard to deal with the rioters who have looted shops and set fires in the Minneapolis-St. Paul area, a move not taken since World War II.

He also said he had spoken with the Pentagon on drawing on US military resources for peacekeeping, and The New York Times reported that, at Trump’s bidding, military police were being put on notice for possible mobilization, a step not taken in decades.

Walz said he would continue to support peaceful protests during the day as members of the African American community memorialized Floyd, whose death on Monday was seen on a horrifying cellphone video around the world.

But Walz alleged that protestors staying out past the 8 pm curfew and wreaking “wanton destruction” of the city had nothing to do with Floyd.

“It will be a dangerous situation on the streets tonight,” he warned.

Saying the rioters were members of anarchist and white supremacist groups, he said: “Our goal is to decimate that force as quickly as possible.”

The protests were expected to continue throughout the weekend even after the now-fired Minneapolis police officer accused of Floyd’s death was arrested and charged with third degree murder on Friday.

With a video showing the officer, Derek Chauvin, pressing his knee on the neck of Floyd for nearly nine minutes until well after he went motionless, while three other officers assisted, Floyd’s family and many protestors demanded more arrests and tougher murder charges.

Chanting Floyd’s repeated words to the police, “I can’t breathe,” protesters across the country said it was the latest example of systemic police brutality against African Americans.

The violence in Minneapolis Friday came despite an 8 pm-6 am curfew.

Despite calling up hundreds of national guard troops to support local and state police, the city found itself outnumbered by those in the streets in defiance of the curfew.

But the televised violence overnight Friday led leaders to accuse rioters of acting on other motives than sympathy for Floyd.

Black community leaders pleaded for the local public to stay home Saturday night, as the curfew was expanded to multiple cities in the state.

“Last night is a mockery of pretending this is about George Floyd’s death or inequities or historical traumas to our communities of color,” Walz said.

Trump, who on Friday branded the protestors “thugs,” said the mostly peaceful protests outside the White House late Friday were “professionally managed” and members of the “radical left.”

He also sought to make the issue political, attacking Democratic officials in Washington and Minneapolis for mishandling the protests.

“These are ‘Organized Groups’ that have nothing to do with George Floyd. Sad!” Trump tweeted.