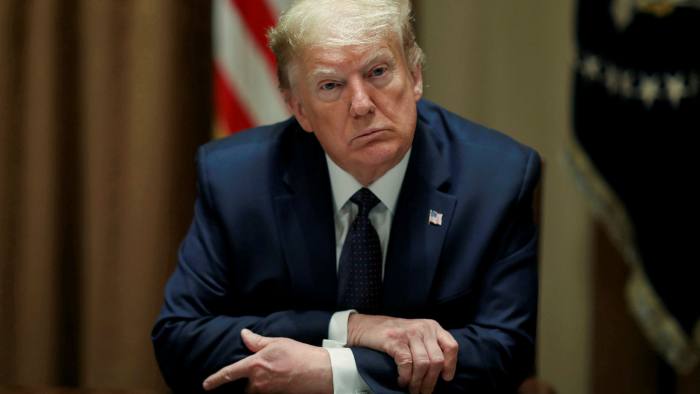 President Donald Trump, agitated and distressed after three nights of violent protests in dozens of cities across the country, including outside of his home, told the nation’s governors in a video teleconference Monday to aggressively target violent protesters he said would only respond to a show of force.

“You have to dominate or you’ll look like a bunch of jerks, you have to arrest and try people,” the President told the governors in a call from the basement White House Situation Room, according to an audio recording of the call obtained by CNN.
In the conversation, Trump appeared angry and chastised what he characterized as a weak response to protests in certain places, which he said allowed violence to take hold. Trump emphasized his belief the violence is being fomented by forces from the “radical left.”
And he suggested to governors it was their responsibility, not his, to tamp down harshly on the continued unrest.
“It’s a movement, if you don’t put it down it will get worse and worse,” Trump said. “The only time its successful is when you’re weak and most of you are weak.”

In admonishing the governors for not doing more to quell the violence, which raged again on Sunday night, Trump was reverting to a hardline “law and order” mantle he believes is the best way to confront growing racial unrest across the nation.
Trump said the “whole world was laughing at Minneapolis over the police station getting burned,” referring to the city where protests began last week after the death of an unarmed black man who was being taken into police custody.
In a back-and-forth with Democratic Minnesota Gov. Tim Walz, Trump said the state was “a laughingstock all over the world” for not responding harshly enough during a first evening of protests.
“So bad a few nights ago that the people wouldn’t have minded an occupying force,” Trump said. “I wish we had an occupying force in there.
On the phone call, Illinois Gov. J.B. Pritzker told Trump the nation was craving a steady hand from the top.
“Rhetoric coming out of the White House is making it worse, people are experiencing real pain,” Pritzker, a Democrat, told the President. “We’ve got to have national leadership calling for calm and legitimate concern for protestors.”
“I don’t like your rhetoric that much either,” Trump fired back. “You could have done much better on coronavirus.”
The message to governors came as Trump and his advisers were continuing to debate the wisdom of a national address following the protests, one of which outside the White House caused him and his family to retreat to an underground bunker on Friday night.

Along with the phone call to governors — which also included law enforcement and national security officials — aides were beginning outreach to black leaders to gauge interest and availability for a “listening session” later this week, which some of Trump’s advisers believe is necessary before delivering any formal address to the nation.
During his time in office, Trump has hired only a few black senior aides. His Cabinet is mostly white, with Housing and Urban Development Secretary Ben Carson the only black member. In recent months Surgeon General Dr. Jerome Adams, who is also black, has taken on a more prominent role during the coronavirus pandemic.
Inside the West Wing, Ja’Ron Smith is a high-ranking African American senior adviser and has been engaged in discussions with other aides over how to best address the situation.
“This is one tough, smart cookie,” Trump said of Smith during a roundtable with African American leaders last month in Michigan.
Trump has sought to make inroads with African American voters in recent months, suggesting — as he did in the 2016 election — that they have nothing to lose in supporting him. But he has not focused intently on issues of police brutality or institutional racism during the first three and half years of his presidency.
While he championed a criminal justice reform effort spearheaded by his son-in-law Jared Kushner, he has also maintained the “law and order” mantle he believes helped propel him to the White House and has worked to roll back Obama-era initiatives meant to demilitarize local police departments.
If there was any question on which side Trump was landing after three nights of sometimes-violent protests — including outside the gates of a highly fortified White House — his phone call with governors cemented the impression he is focused on advancing a law and order message, not necessarily the underlying issues of racism and police brutality that initially sparked the protests.
“You have to dominate,” he said. “If you don’t dominate, you’re wasting your time.”

Trump out of sight

The President has not been seen in public since traveling to Florida on Saturday and his schedule did not include any public appearances Monday. Aides were still deliberating how and whether Trump should come out and address some of the worst unrest in decades.
Some of the President’s allies have grown increasingly frustrated with what has felt to some like silence from the White House on the unrest and underlying racial tensions. Many, from campaign donors to Republicans on Capitol Hill, have privately grumbled that Trump has allowed several days to pass without addressing the nation or making any formal appeals for unity.
What Trump has done publicly — tweet extensively about his grievances with state and local Democratic leaders and mention the protests in the middle of a previously scheduled event — has at best gone unnoticed and at worst fanned the flames of outrage into a second week.
Some outside allies have reached out to the White House to push for an appearance from Trump in which he would confront a crisis he has largely watched unfold from behind closed doors or in the underground bunker. One major campaign donor worried the damage inflicted by Trump’s absence during a historic weekend of violence and pain could alone imperil his reelection.
A person familiar with the matter said there is a sense among allies that an attempt to address the situation in a speech over the weekend fell completely flat. The person said the unrelated backdrop of the Kennedy Space Center — and the fact that it came on a Saturday afternoon — ensured few people even registered the passages that were added to the speech at the last minute.
The person also noted a growing sense among congressional Republicans, even allies, that the “caps lock” tweets are not helping the situation.
Republican Sen. Tim Scott of South Carolina said on “Fox News Sunday” that he had spoken to Trump over the weekend about his inflammatory tweets, which he described as “not constructive.”
But the President’s rant Monday morning to governors illustrated risks of putting Trump out to confront the protests when he is worked up and angry.

Inside the White House, advisers remain divided over whether a speech delivered from the Oval Office or elsewhere at the White House would help lower the national temperature.
Trump has expressed interest in delivering a speech to the nation, a person close to the White House said, but some administration officials believe that would be a mistake. A senior White House aide said governors and mayors should be the ones responding to the destruction in their respective cities and states — a view at least partially shared by Trump, who has spent days going after local leaders for not calling the National Guard fast enough or cracking down on violence aggressively enough.
Other White House officials argued over the weekend against something as formal as an Oval Office address, a person familiar said, out of concern that such a speech could “inflame the situation, not make it better.”
It did not seem such a speech was imminent on Monday morning.
“A national Oval Office address is not going to stop Antifa,” White House press secretary Kayleigh McEnany said in an appearance Monday on Fox News, noting that Trump had addressed the killing of George Floyd — a black Minneapolis man who died after a white police officer knelt on his neck during an arrest — several times already.
“The President has addressed this repeatedly,” she said. Later, McEnany said Trump’s “focus right now is acting and keeping our streets safe.”
Some inside the White House also believe Trump should hear from members of the black community to better understand the issues and to help generate ideas for how to move forward.
It’s not clear when or if such a listening session will materialize, but some aides believe it will be necessary — along with Trump’s other efforts to hear from law enforcement and governors — before delivering any kind of national address.
Trump has spoken with Floyd’s family members, he announced late last week. But according to Floyd’s brother, the conversation did not feature a great amount of listening by the President.
“It was very brief,” Philonise Floyd told CNN on Sunday night. “The conversation was OK with him. I was just respecting him, listening to what he had to say. I understood what he was saying, but it was just a brief conversation.”
CNN