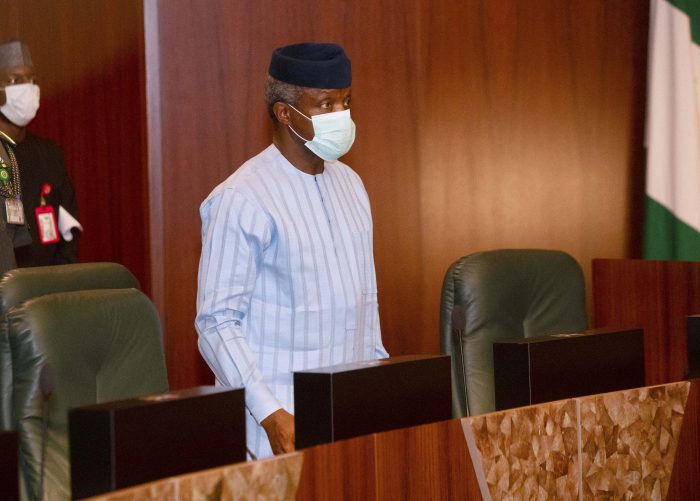 Vice President Yemi Osinbajo said gender-based violence, rape, and sexual assaults are blemishes on the collective humanity and dignity of Nigerians as a people and a nation.

Osinbajo expressed his displeasure on Friday in Abuja while addressing a virtual meeting of the National Human Rights Commission (NHRC), on the scourge of rape, sexual and gender-based violence in Nigeria

Osinbajo’s spokesman, Laolu Akande, in a statement said the vice president affirmed that the fight against gender violence would be driven down to the states through the National Economic Council (NEC).

“I will continue to use the platform of the National Economic Council to encourage states yet to domesticate the Violence Against Persons Prohibition Act of 2015 and the Child’s Rights Act of 2003 to do so.

“Gender-based violence, rape, and sexual assaults are blemishes on our collective humanity and dignity as a people and a nation.

“We will work with all actors to detect and punish the perpetrators of these sickening acts and work even harder to prevent their occurrence.’’

Osinbajo commended NHRC for taking the lead on the important conversations around rape and gender-based violence in Nigeria, and for organising a week-long sensitisation and advocacy campaigns.

Osinbajo also lauded the Minister of Women Affairs, Paulen Talen, for her historic presentation on the subject to the Federal Executive Council, which led to the adoption of several important resolutions.

The vice president said that the National Agency for the Prohibition of Trafficking in Persons, the International Community and several civil society organisations had also been at the forefront of finding solutions to address the root causes of gender-based violence.

“While violence against women has always been a challenge in Nigeria, the COVID 19 lockdown has occasioned a steep increase in sexual and gender-based violence across the country.

“Also, a few days ago the Inspector General of Police disclosed that the police had recorded about 717 rape incidents across the country between January and May.

“And that 799 suspects had so far been arrested, 631 cases conclusively investigated and charged to court, while 52 cases are still under investigation.

“What these figures show is an escalation of an already disgraceful trend of violence against women and girls in the country.”

He regretted the rapes and murders of Mrs Queen Igbinevbo, a pregnant woman in her home in Edo on May 20, 2020, Vera Uwaila Omozuwa, and a 22-year-old student of University of Benin on May 27, 2020.

More so, that of Barakat Bello, an 18-year- old female student of Federal College of Animal Health and Production, Ibadan on June 1, 2020; among others, saying they should never have happened and must not be allowed to continue.

“On June 11, state governors, under the auspices of the Nigeria Governors Forum (NGF), agreed to declare a state of emergency on rape and gender-based violence against women and children, while renewing their commitment to ensure that offenders face the full weight of the law.

“Similarly, the president, in his June 12 address to Nigerians, reiterated government’s determination to fight gender-based violence through the instrumentality of the law and awareness creation,’’ he said.

According to him, there is need to look beyond just legislation to fix the problem, but rather, interrogate the dysfunctional cultures, the systemic flaws in institutions and perverse social norms that enable sexual and gender-based violence.

The Women Affairs Minister, the Executive Secretary of the NHRC, Tony Ojukwu, representatives of the United Nations and civil society organisations participated in the virtual meeting.