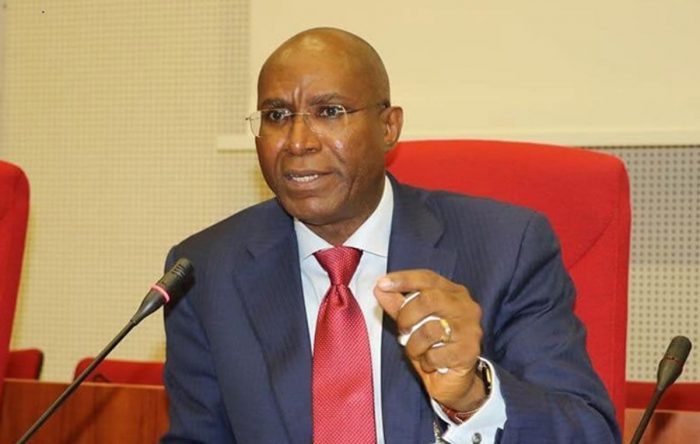 The Federal High Court, Abuja, on Thursday, dismissed the suit seeking the withdrawal of the Certificate of Return of Deputy Senate President, Senator Ovie Omo-Agege. Justice Ahmed Mohammed, in his judgment, described the case as an abuse of court process.

Justice Mohammed, who held that the issue had already been laid to rest after Justice Uthman Musa of the FCT High Court, Bwari, delivered a judgement in the matter, awarded a N300, 000 cost against the plaintiff which must be paid to each of the defendants.

A group, the Incorporated Trustees of Empowerment for Unemployed Youths Initiative, had, on May 19, approached the court, asking to order the withdrawal of the Certificate of Return issued to Omo-Agege.

Also joined as defendants in the suit are the Clerk of the National Assembly, the All Progressives Congress (APC) and the Independent National Electoral Commission (INEC).

In a suit number: FHC/ABJ/CS/510/2020 filed by its lawyer, Mr Edward Omaga, the group also prayed the court for an order of perpetual injunction restraining Omo-Agege from occupying the office of senator representing Delta Central Senatorial District and deputy senate president.

The group said its suit was based on the grounds that Omo-Agege was not a competent, fit and proper person to occupy such an office considering the conviction hanging over his neck.

According to the group, this is as per the judgement of the hearing of the Department of the State Bar Court sitting in Los Angeles, California, USA, delivered on Nov. 30, 1995, whereupon Omo-Agege was sentenced to jail and suspended from law practice for two years for felony involving moral turpitude, forgery of cheques amounting to $890 with which he intended to defraud the Bank of America, Ahined Mehone and Elpert Defrietas in violation of California penal code section 470.

The plaintiff also prayed the court to award N500 million damages against the clerk of the senate for accepting to declare Omo-Agege deputy senate president after his nomination and election on June 11, 2019.

At the hearing of the suit on June 16, the respondents’ lawyers, Dr Alex Izinyon, SAN, representing Omo-Agege, Chikosolu Ojukwu representing the Clerk of the Senate and the APC, as well as Taminu Inuwa, SAN  for INEC, denied the alleged conviction, urged the court to dismiss the suit and award substantial cost against the plaintiff.

They all insisted that the appellate court in California in the US had cleared Omo-Agege of any wrongdoing in December 1996.

“Acquittal means legal certification that the accused is not guilty of the offence,” Izinyon had argued.

Justice Mohammed had, in the last sitting, fixed Junes 25 for judgment after taking arguments from parties in the case.

Delivering his judgment, the judge upheld the preliminary objection.

Mohammed noted that the plaintiff ought to have immediately withdrawn the suit on realising that the High Court of the Federal Capital Territory in Abuja, a court with coordinate jurisdiction with the Federal High Court, had already decided the issue in the suit.

“It is manifestly clear from the judgment alluded to that, that there was no conviction as alleged,” he held.

The judge said that contrary to the contention of the plaintiff, it was bound by the FCT High Court judgment despite not being a party to suit in which the said judgment was delivered.

“In the light of the above,  the plaintiff is bound by the judgment of my brother, Justice O.A Musa of the FCT High Court delivered on January 29 wherein it was declared that the defendant was not convicted.

He said what the suit intended to do was to bring up the issue already laid to rest by judgment of the FCT High Court.

He added that by refusing to take an immediate step of withdrawing the suit on being aware of the FCT High Court judgment, the plaintiff  “lends credence to the contention of the counsel for the first defendant that the suit was filed in obvious attempt to annoy and irritate the first defendant.”

Justice Mohammed specifically ordered that the plaintiff and its lawyer must pay the sum of N300,000 to each of the four respondents – Omo-Agege, the Clerk of the National Assembly, APC and INEC.