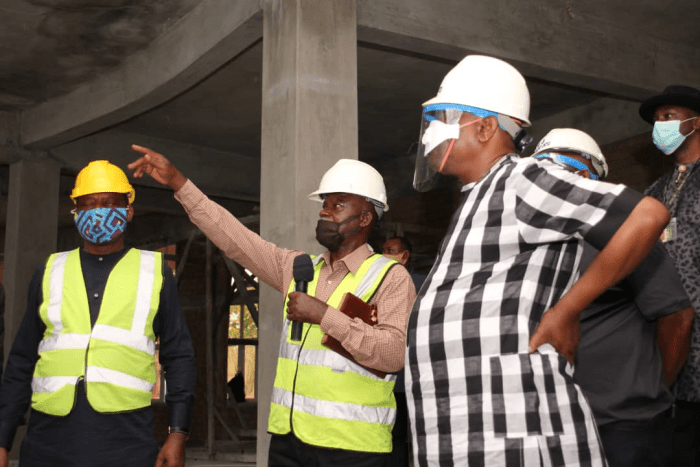 Rivers Governor Nyesom Wike on Friday threatened to sanction contractors who failed to abide by the contractual agreement in handling state projects.

Governor Wike said it was unacceptable for contractors, particularly those who had received full payments before the COVID-19 pandemic to use it as an excuse not to deliver their projects on time or compromise set standard.

The governor issued the threat shortly after inspecting projects located in Eleme and Tai local government areas of the state.

Governor Wike said while the structural work of the 5,000 capacity auditorium at the National Youth Service Corps,NYSC, orientation camp in Nonwa,Tai Local government area in Ogoniland was commendable, the contract would however be reviewed.

According to the governor, the review has become necessary because the contractor refused to make the furnishing of the auditorium an integral part of the original design.

“I don’t know how anybody would design a modern structure and begin to talk about terazzo floor. You can’t also construct a building without talking about furnishing. These things have to go hand in hand.

“I’ll make sure that the right thing is done. We have paid 100% and what I have seen I’m not satisfied.

“Again, the contractor has no reason to use covid-19 as reason for the delay. Payment was made to him In November 2019, and covid-19 started in march 2020.

“We have to be very strict with contractors; those who do not want to fulfil their contractual agreement, government will take its stand and sanction them even if the supervising ministry or agency may not have done very well,” he added.

Governor Wike also said that various projects at the NYSC orientation camp serve as support to federal agencies located in the state as they continue to render services to Rivers people.

“They are here to serve Rivers people. There is need to give them support. We have done the internal roads within the NYSC camp, and we have completely renovated the entire building structure for them,” he emphasised.

The governor who also inspected the progress of work at the Community Secondary School in Eteo community in Eleme local government area said his administration had projects sited in every local government of the state and that he was committed to completing them.

He added that a directive has been given to the contractor handling the community school project to add construction of a library for reading activities and a chapel auditorium for regular religious worship.