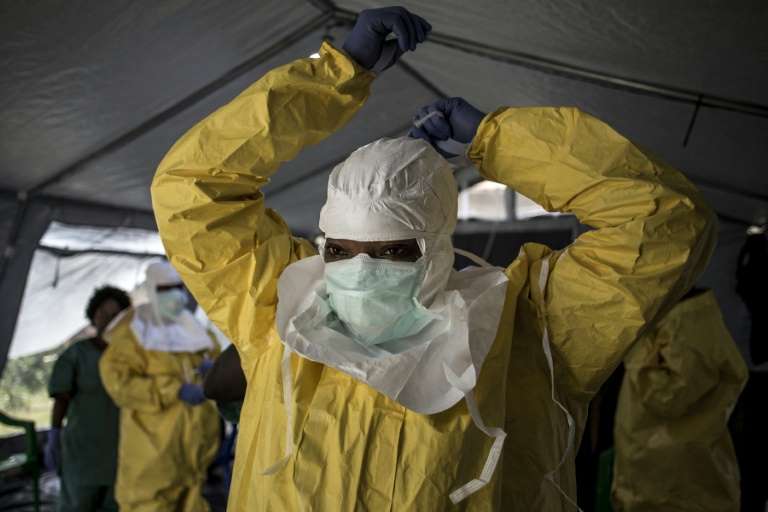 The Ebola outbreak in the DR Congo’s northwest is growing, according to health officials, sounding the alarm weeks after the country officially declared an end to a separate Ebola epidemic which claimed over 2,000 lives.

There have been 54 confirmed cases since June 1 in Mbandaka, a transport hub in Equateur province, including 22 deaths, according to figures released by the country’s health ministry on Friday.

There were four additional suspected cases.

The outbreak is DR Congo’s 11th since Ebola was identified in 1976.

On June 25, the vast central African country officially declared an end to an Ebola epidemic that broke out in the east two years ago, which Health Minister Eteni Longondo said was “the longest, most complex and deadliest” in the country’s history.

The two epidemics have no common viral strain, according to the World Health Organization (WHO).

Read Also: Measles: In Ebola’s Shadow, A Quiet Killer Is In The DRC

The WHO called the latest figures “of great concern”, saying that it had identified 56 cases by Thursday.

“It is now surpassing the previous outbreak in this area which was closed off and controlled at a total of 54 cases,” said Matshidiso Moeti, the WHO’s regional director for Africa, referring to a 2018 Ebola outbreak in Equateur in which 33 people died.

The epidemic is spreading from Mbandaka’s urban centre to surrounding remote villages in forests along the Congo River, some of which can only be accessed by canoe or all-terrain vehicles.

“There are infections in several villages,” a local official, Moraliste Nembetwa, told AFP.

The virus is passed on by contact with the blood, body fluids, secretions or organs of an infected or recently deceased person.

The death rate is typically high, ranging up to 90 percent in some outbreaks, according to the WHO.

Serge Ngalebato, a doctor at the Bikoro hospital, said the epidemic affects “an area with fragile health”.

The country is facing a measles outbreak which has killed more than 6,000 people since early last year, as well as recurring flare-ups of cholera and malaria.

DR Congo is also struggling with the new coronavirus, with 8,249 cases including 193 fatalities.

WHO officials worry that because of these competing health crises, there could be a lack of funding for the Ebola epidemic.

“We have less than two million dollars in our account,” said WHO spokesperson Fadela Chaib about funding for the current Ebola outbreak.

DR Congo’s partners and donors may be cautious over worries that an injection of money could create fertile ground for conflicts of interest, a source close to the United Nations told AFP.

An investigation by The New Humanitarian last month found that payments to security forces and job kickback schemes “may have jeopardised humanitarian operations and put lives at risk”.

The influx of money to combat the spread of the virus in the east “has raised people’s expectations”, the source said.

Ebola experts said the experience of the eastern outbreak will be vital for informing further action.

Officials must “listen and involve communities in time, in dialogue and planning the response… otherwise we risk being counter-productive,” said Abdou Dieng, head of the United Nations Emergency Ebola Response.

Health authorities have launched a vaccination campaign, as was done in the east where two experimental vaccines were widely deployed and more than 320,000 people received a jab.

“More than 8,000 people have been vaccinated,” said Alhassane Toure, a vaccination coordinator.

“All the affected health zones have been covered by the vaccination.”