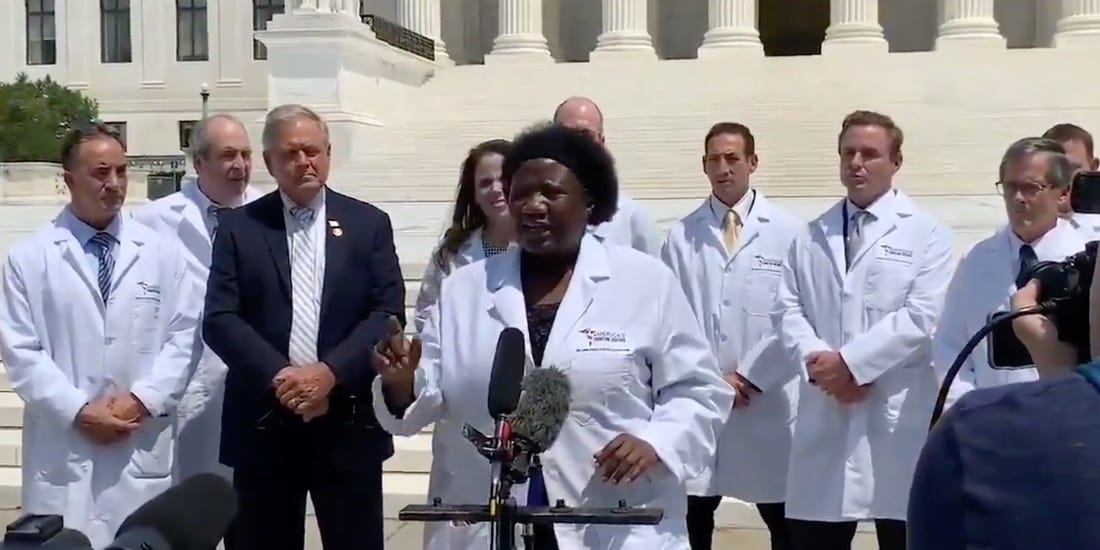 The controversial doctor praised by Trump for touting hydroxychloroquine as a cure for coronavirus was once sued for malpractice when a patient died with a meth needle in her arm, it was been revealed.

Dr. Stella Immanuel has faced criticism from health experts after she promoted the malaria drug as cure on the basis of claims that 350 patients she treated with it didn’t die.

The doctor has also said that cysts, fibroids, and some other conditions can be caused by having sex with demons, that McDonald’s and Pokemon promote witchcraft, that alien DNA is used in medical treatments, and that half-human ‘reptilians’ work in the US government.

On Wednesday it emerged that the family of one of Dr. Immanuel’s patients filed a lawsuit claiming her negligence resulted in the death of Leslie Norvell, who had complained about a methamphetamine needle that broke off in her arm.

According to the lawsuit, Norvell went to the Sabine Medical Center where Immanuel and was given medication but no attempt was made to remove the needle fragment that had broken off inside her arm.

The lawsuit also claims that Immanuel and another doctor who prescribed Norvell the medication failed to take a closer look at her arm or alert authorities.

The suit states that Norvell went home after visiting Immanuel but ended up going to a hospital hours later to have the needle fragment removed because she was in so much pain.

A flesh-eating infection in her arm allegedly caused her death six days later in February 2019.

Police were unable to serve the doctor with the lawsuit in April because she no longer worked at the medical facility.

They had no idea she had moved to Texas where she has since become notorious for claiming hydroxychloroquine is a valid coronavirus treatment despite global trials suggesting otherwise.

Dr. Immanuel – who is 55 years old and was born in Cameroon – now works at the Rehoboth Medical Center but someone who answered the phone told the Houston Chronicle that she was out of town on Wednesday.

The doctor – who went to college in Nigeria and completed a residency in New York City – has claimed that the anti-malarial drug would stop the COVID-19 in 30 days.

‘I’m kind of used to these medications,’ Immanuel said in the video. ‘When they started saying it was dangerous, I was like, what? Because we give it to babies, pregnant women, elderly people. Everybody takes it. Hydroxychloroquine works.’

‘You don’t need masks. There is a cure. You don’t need people to be locked down,’ the doctor also said, against the advice of global health experts.

In February, officials like the US surgeon general urged Americans not to stockpile masks because they were needed by medical personnel and might not be effective in everyday situations.

Public health officials then told people to wear masks when it became apparent that the virus could spread among people showing no symptoms.

Yet Trump remained reluctant to use a mask, mocked his rival Joe Biden for wearing one and suggested people might be covering their faces just to hurt him politically.

He did an abrupt about-face this month, claiming that he had always supported masks – then later retweeted Immanuel’s video against masks.

US federal regulators last month revoked their authorization of the drug as an emergency treatment amid growing evidence it does not work, and can have deadly side effects.

Even if it was effective, it would not negate the need for masks and other measures to contain the outbreak.

Twitter and Facebook began removing the video of Immanuel’s speech on Monday for violating policies on COVID-19 misinformation, but it had already been seen more than 20 million times.

Facebook has also removed some groups for mask skeptics due to false claims about mask safety. Unmasking America!, which had nearly 10,000 members – but others remain.

However, Dr. Immanuel’s video message has been shared on social media by President Trump and his son Donald Jr.

The American leader has said he’s a ‘big fan’ of Dr. Immanuel.

‘I was very impressed with her and other doctors that stood with her,’ Trump told reporters Wednesday before traveling to Texas. ‘I think she made sense, but I know nothing about her.’

As of Thursday there were more than 4.5 million coronavirus cases in the US and 153,314 lives have been recorded as lost due to the growing pandemic.

By comparison, more than half a million people have died in the rest of the world, according to Johns Hopkins University.

More than 2.2million people have recovered from COVID-19.

After failing to enforce strict social distancing measures while other states suffered earlier in the pandemic, which was announced in March, Texas is now the third worst affected behind California and Florida.