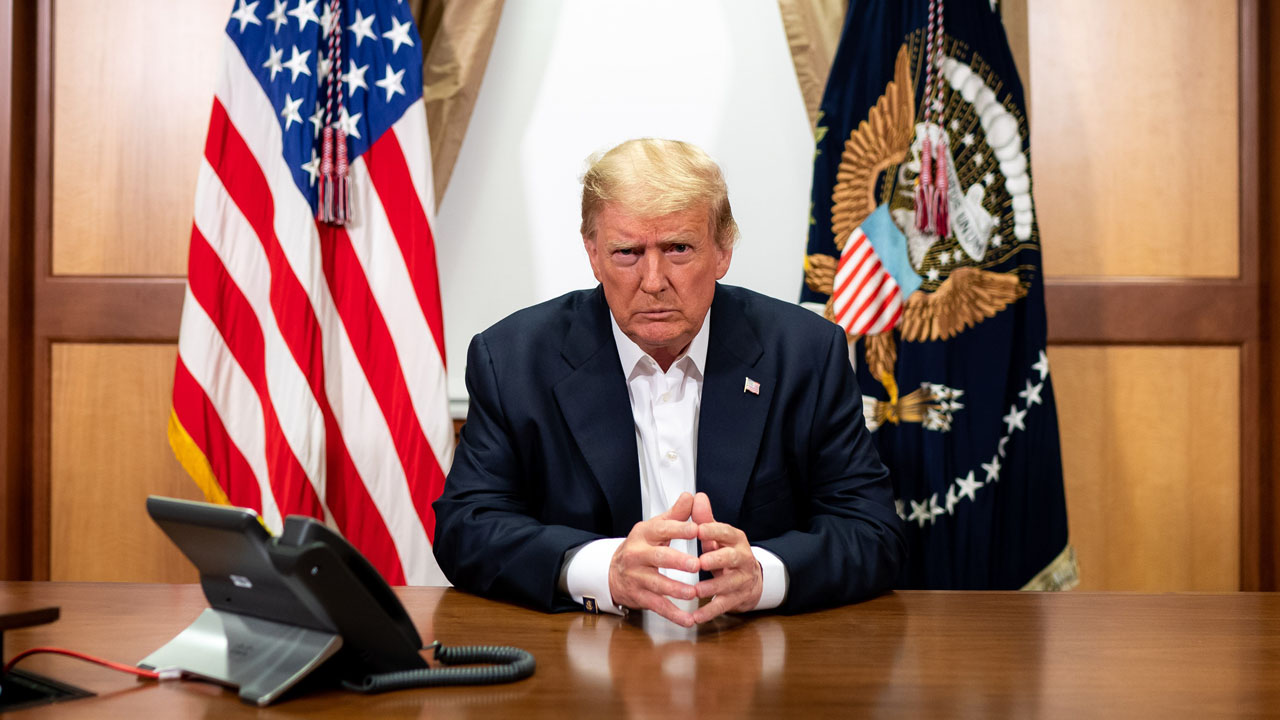 Donald Trump’s doctors were to decide Monday whether he is recovered enough to leave the hospital and continue Covid-19 treatment at the White House, as the president signalled his determination to return to the election campaign with an early morning tweetstorm.

Conflicting official updates since Trump’s hospitalization on Friday have created confusion over his health, but his chief of staff said the 74-year-old’s condition had improved overnight, raising hopes he could be discharged during the day.

“We are still optimistic that based on his unbelievable progress and — and how strong he has been in terms of his fight against this Covid-19 disease, that he will be released,” Mark Meadows told Fox News.

“But that decision won’t be made until later today.”

Trump’s Covid-19 diagnosis has upended the White House race less than a month from polling day — and cast a harsh spotlight on the president’s much-criticized management of the pandemic which has claimed over 200,000 American lives.

Eager to portray himself as in charge despite his sickness, Trump sent 15 block-capital tweets in 30 minutes, appealing to voters by claiming a record of successes in his first term including tax cuts and stock market highs and protecting gun rights and religious liberties.

The tweetstorm came after the president sparked an angry backlash with a protocol-breaking visit to supporters outside the hospital where he is being treated.

He was masked as he waved from inside his bulletproof vehicle during the short trip outside Walter Reed military medical center near Washington on Sunday evening.

Trump, who has been repeatedly rebuked for flouting public health advice and spreading misinformation on the pandemic, said in a video on Twitter just before his outing that he had “learned a lot about COVID” by undergoing treatment.

But experts complained he had broken his own government’s guidelines requiring patients to isolate while they are in treatment and still shedding virus — and had also endangered his Secret Service protection.

‘This is insanity’
“Every single person in the vehicle during that completely unnecessary Presidential ‘drive-by’ just now has to be quarantined for 14 days,” said James Phillips, chief of disaster medicine at George Washington University.

“They might get sick. They may die. For political theatre. Commanded by Trump to put their lives at risk for theatre. This is insanity.”

The president was flown to Walter Reed with a high fever on Friday after a “rapid progression” of his illness, with his oxygen levels dropping worryingly low, White House doctor Sean Conley said in a Sunday briefing.

Conley admitted that he had kept from the public the fact that the president had been given extra oxygen, in a bid to reflect an “upbeat attitude.”

He had given a rosy account of Trump’s progress Saturday, only for chief of staff Meadows to tell reporters immediately after that Trump’s condition had been “very concerning” and that he was “still not on a clear path to a full recovery.”

Facing an uphill campaign ahead of the November 3 vote against Democratic rival Joe Biden, Trump’s diagnosis and hospitalization have left him sidelined from what he loves — campaigning in person.

Biden, who announced Sunday his latest negative test for the virus, will start the week with a trip Monday to key swing state Florida.

Recent polls give Biden a significant lead among registered voters.

Controversy has been mounting over the possibility that Trump might have exposed numerous others to Covid-19.

A timeline provided by his advisors and doctors suggested he met more than 30 donors on Thursday in Bedminster, New Jersey, even after learning that aide Hope Hicks had the virus — and just hours before he announced his own positive test.

As well as Trump and Hicks, numerous White House insiders and at least three Republican senators have contracted Covid-19, along with First Lady Melania Trump, who has not experienced severe symptoms.

Public health experts have expressed alarm at the “White House cluster” that has been linked to the September 26 Rose Garden celebration of conservative judge Amy Coney Barrett’s nomination to the Supreme Court.