Uzodimma, Okorocha’s In An Uproar for 2023 Igbo Presidency 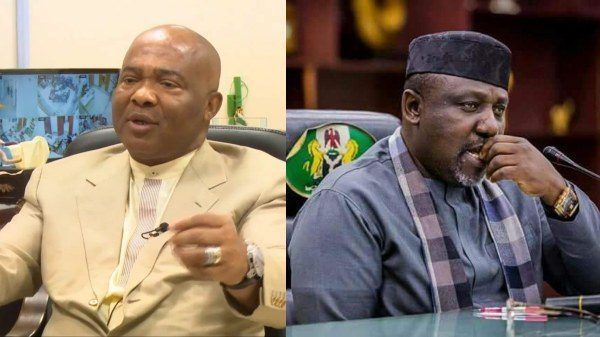 As the campaign to produce a president of Igbo extraction in 2023 gathers momentum, a senior lawyer, Oba Maduabuchi has warned that ongoing rift between Governor Hope Uzodimma of Imo State and the former governor, Senator Rochas Okorocha, was capable of defeating the project.

The senior lawyer who spoke with Daily Sun said what Igbo needed now more than anything else was to close ranks and unite in pursuit of the presidency.

He said the feasibility of a president of an Igbo extraction will depend on how the Igbos carry themselves with other regions in pursuit of the presidency.

Maduabuchi, however, expressed worry over the current fight between Governor Uzodimma and Senator Okorocha saying it was capable of derailing and defeating the presidency project.

Senator Rochas Okorocha wants to be president, he said it openly. But who is fighting him? It is the Imo state Governor, Senator Hope Uzodimma. I am Okorocha’s lawyer and I can confidently tell you that even the former governor, Emeka Ihedioha, who is from a different political party, did not fight Okorocha as much as Uzodinma is fighting him. And Okorocha wants to be president and the first person fighting him and making sure he does not contest for the presidency is an Igbo governor. Is it how we are going to produce the president?

Governor Uzodimma is bent on thwarting Okorocha’s presidential ambition by making sure that he goes to jail. As we speak, Okorocha has been subjected to all manner of investigations  by the Economic and Financial Crimes Commission (EFCC) and several other probe panels over alleged financial infractions during his tenure as governor all in an attempt to send him to jail at all cost.

Another potential presidential candidate of Igbo extraction is former governor of Ananmbra, Mr. Peter Obi. He will make a fantastic president…Now Peter Obi wants to be president, and the Igbo are proping up Atiku Abubakar. They are saying Atiku should contest again. Is that how we are going to produce a president?  Senator Bola Tinubu has just opened his presidential campaign office in Abuja. He is organising, he has offices in all the states as we speak.  How are we doing it? We don’t give presidency in bear parlors. It’s not like ‘Mama Ngozi give us pepper soup.