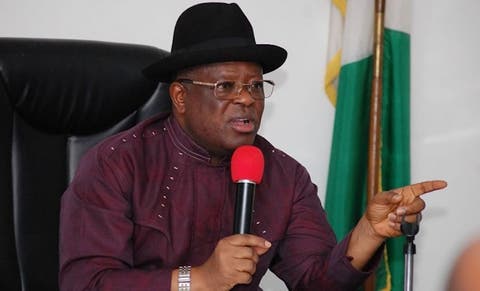 There are strong indications that the planned defection of Peoples Democratic Party (PDP), Governor of Ebonyi State, Mr. Dave Umahi plan to join the ruling All Progressives Congress (APC) has been blocked by the South-east bigwigs of the ruling party.

Report said that the governor was billed to join APC this week, with the stakeholders in Ebonyi APC yesterday insisting that the defection of the governor was imminent. But reliable sources have confirmed that his defection is being blocked by Stakeholders from South East, especially some members of the National Assembly and ministers from the South-east. The blocking is not unconnected to the 2023 presidential ticket as the source said that these stakeholders made it clear to the Ebonyi State governor that the APC presidential ticket is not up for grabs by him.
It was also gathered that the defection move was perfected and sealed during Umahi’s recent visit to Abuja where he met with APC top hierarchy. We also gathered that a lot of activities are being lined up at the PA Ngele Oruta Township Stadium, Abakaliki, where the governor and others have perfected plans to officially defect, yet to be announced this week.

The Mala Buni-led APC while reacting to the development said though the Ebonyi State governor is welcomed to the party, the APC cannot just give him the presidential ticket. He also made it clear that the APC presidential ticket has not been zoned to the South East saying “nothing indicates that the APC ticket has been zoned to the South-east.”
“If anyone is promising him the presidential ticket, he should be careful because it is a Greek gift. APC cannot give him the ticket just because he defected to our party. ,” a source said: “We have others with presidential ambition and no one, even President Muhammadu Buhari can grant him the presidential ticket like that.”
Continuing, he said: “Who told Governor Umahi that the ticket is automatically granted to the South-east and Ebonyi State for that matter. We have presidential aspirants like Senator Rochas Okorocha, Dr. Ogbonnaya Onu, and Senator Orji Uzor Kalu from the South-east.
“We also have Senator Bola Tinubu and Governor Kayode Fayemi of Ekiti State from the South-west, which has more APC states under its control than the South-east. There must be something else that is pushing him than presidential ambition.”
The planned move may have also pitted the governor with the top leaders of the two main political parties in the state. While the APC has blocked his entry, the PDP is still keeping mum on the move by the governor.
Reports say that the governor is already seeking a gradual U-turn to remain fully in PDP since APC leaders both in the state and in the South-east caucus are not enthusiastic about receiving him. It was learnt that the APC leaders in the region who are standing in his way are the Ministers of Science and Technology, Dr. Ogbonnaya Onu, from his state; Labour and Productivity, Dr. Chris Ngige, from Anambra and Minister of State for Education, Chief Emeka Nwajiuba, from Imo State and others. It was learnt that they felt slighted as they were not consulted by the Governor.
APC Members of the National Assembly from the South-east also echoed the same sentiment of not being considered for consultation over the movement to the ruling party.
Report says that Umahi had negotiated his entry into the party directly with the presidency and decided to ignore other leaders from the zone. It was also gathered that none of the three blocks in the APC at the national level is willing to have Umahi whom they believe is coming for the presidential ticket. Rumors about the governor’s defection grew stronger after his visit to the Presidential Villa last month and he was congratulated by an APC legislator from his state. The Governor has since denied in a press statement by his Special Assistant on Media and Publicity, Mr. Francis Nwaze, in Abakaliki, denied Umahi’s defection to APC, saying that “the news is a product of a figment of imagination on the part of the carriers as Governor Umahi was, is, and is still flying the flag of the Peoples Democratic Party (PDP). It is, however, difficult to observe how people are easily persuaded to believe in fake dummies in the name of rumors.
But when contacted for his reaction, the Ebonyi State APC Chairman, Pastor Eze Nwachukwu Eze, said that the party’s doors are open to welcome Umahi and others to the fold. A chieftain of APC in Ebonyi State claims that the Gov’s defection is imminent. Also, the stakeholders in Ebonyi APC yesterday insisted that the defection of the governor was imminent.
In a meeting held in Abakaliki, the Ebonyi State capital, the stakeholders who noted that Umahi’s defection was imminent also described his defection as a big catch for the APC in the South-east geopolitical zone of the country. The Convener of the meeting and Chieftain of the APC in Ebonyi State, Senator Julius Ucha, who called on party faithful to work towards the eradication of factions within the party in the state, noted that the governor’s defection to the APC has already materialised. He further called on the governor to immediately join the APC as the party is eagerly waiting to receive him.