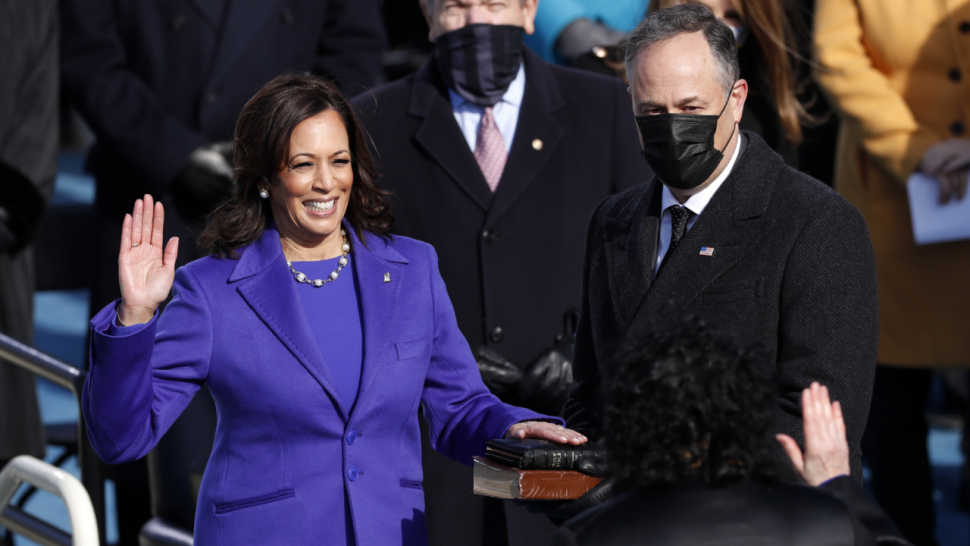 Kamala Harris has taken the oath of office, making her the first female, first Black and first South Asian vice president of the United States.

She was escorted by Capitol Police office Eugene Goodman, who has been hailed as a hero after video emerged of him guiding the violent mob away from the Senate chamber during the Capitol riot.

Harris took her seat alongside her husband, Doug Emhoff.

‘Kamala Harris is wearing purple, something pretty significant to her. When she ran for president, one of the colors of her campaign was purple and yellow. That is a nod to Shirley Chisholm who ran for president as a black woman decades ago and has inspired her political career,‘ CNN’s Abby Phillip.

Read Also: With Kamala Harris, Biden On The Way To Victory

She was sworn in by Supreme Court Justice Sonia Sotomayor, which is a history-making event in several ways.

It’s reported that Harris chose Sotomayor for the task.

She used two Bibles for the swearing-in, one of which belonged to Thurgood Marshall, the first black Supreme Court justice.

Earlier, Minnesota Senator Amy Klobuchar, who ran against both Biden and Harris during the Democratic primary, welcomed the new administration.

She also greeted ‘a whole bunch of Bidens,’ in a reference to the large Biden family that is there today.

‘This conveyance of this sacred trust between the leaders and its people takes place in front of this shining capitol dome for a reason,” she says, adding that it is a sign that the US “union will go on,’ she said.

Popstar Lady Gaga sang the National Anthem shortly, following in the footsteps of Beyoncé and opera great Marian Anderson, who performed for both John F Kennedy and his predecessor Dwight D Eisenhower.

The singer, who campaigned for Joe Biden during the election, said she was ‘deeply honored’ to be chosen for the ceremony.