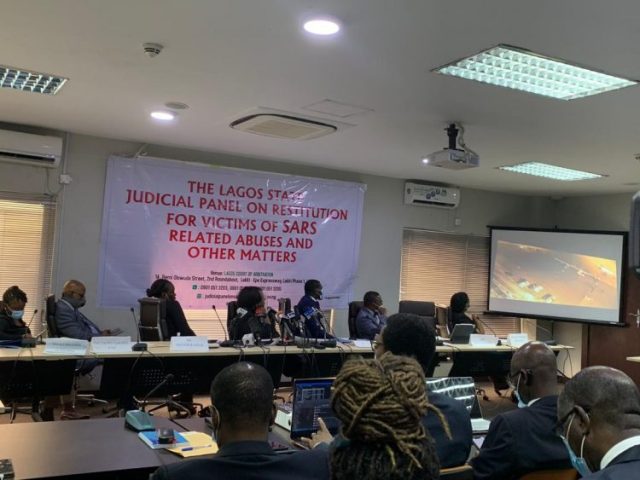 The Nigerian Army on Saturday failed again to show up before the Lagos Judicial Panel.

This is the third time the army has failed to appear before the panel the other two times being on December 12, 2020,  and January 8, 2021, despite being served to summon on each of those occasions.

Neither the summoned officers of the Nigerian Army nor their legal representative, Akinlolu Kehinde, a Senior Advocate of Nigeria (SAN), appeared before the panel on Saturday.

Jonathan Ogunsanya, Counsel to the panel said that the army officers including Colonel Bello were issued summoned.

‘We sent to Godwin Umelo, at the General Office, 81 Division, it was sent by way of DHL. The third summon was issued and served on Brigadier General Francis Ogbaje Omata.

‘We also spoke to the lead counsel on record for the Nigerian Army, A.T Kehinde SAN, informing the learned silk of the proceedings and he said we should serve the Army directly, which we did,‘ he said.

Adeshina Ogunlana, counsel to some #EndSars protesters said that the panel should summon the counsel for the Nigerian Army to give explanations on why his clients have refused to appear before the panel despite several summonses.

He insisted that if the military is trying to avoid the panel, the learned counsel should not.

‘It behooves on counsel (Mr. Kehinde) to come and explain before this honorable court or give an explanation of the situation of the failure of his clients to responding to the Summons of the panel.’

‘If the Military is dodging, the gentleman lawyer must not be allowed to dodge. He should come back before this panel and give (an) explanation’.

Olumide Fusika, a Senior Advocate of Nigeria who appeared before the panel said that every petition against the Nigerian Army should be compiled and served on them, and when the petitions come up, they are expected to appear.

He also aligned himself with Mr.Ogunlana’s request that a summon should be served on the army counsel to give explanations on his client’s absence.

Justice Doris Okuwobi the chairperson of the panel, said the non-appearance of the Nigerian Army is causing a delay in the panel’s proceeding.

‘The difficulty the panel now experiences is having Mr. Kehinde explain to the panel why those summoned by the panel are not attending proceedings, this is creating an undue delay in the investigation of the Lekki event of October 20, 2020.

‘In respect, it is hereby ordered that the counsel for the panel shall issue a letter to learned silk, Mr. A.T Kehinde, Senior Advocate of Nigeria, to appear before the panel at the next adjourned date to explain why he would not conclude the case of the Nigerian Army’.

Mrs. Okuwobi said it behooves Mr. Kehinde to assist the panel in achieving the task of investigating the Lekki Shooting incident to avoid issues of denial of fair hearing that might arise when the panel’s report is submitted to the government.

However, the case was however adjourned till January 30 so the army and their lawyer can appear.