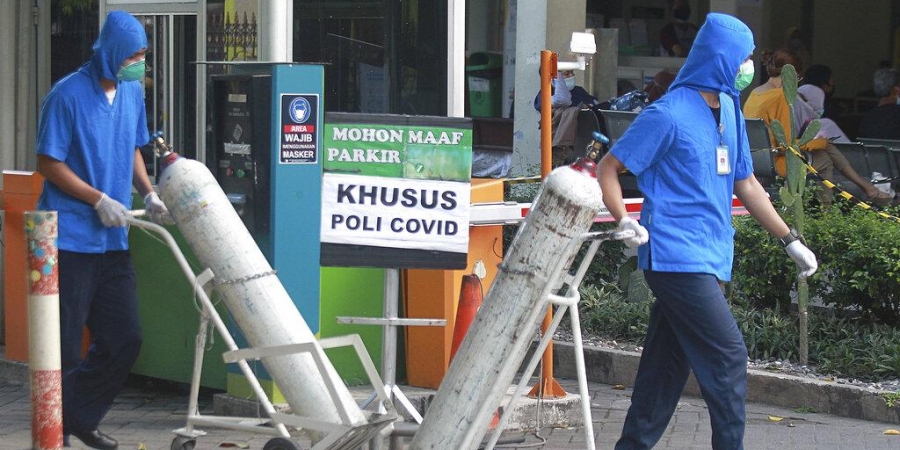 Indonesia yesterday admitted that it was bracing for a punishing surge in Covid-19 cases as its daily toll soared to a record 728 deaths with hospitals crumbling under the weight of the country’s deadliest wave of the sneaky virus.

As at Tuesday, Emergency oxygen supplies for virus patients were being flown in from neighbouring Singapore, while the government warned that Southeast Asia’s worst-hit nation could see cases soar to more than 50,000 a day.

Hospitals in the hard-hit capital Jakarta were recording up to 90 percent occupancy and more than a dozen facilities in Indonesia’s second-biggest city Surabaya shut out new patients because they could no longer handle the huge influx.

‘The hospital no longer has rooms for patients who need ventilators. The ICU rooms are also full,’ the woman lamented.

‘We’re overwhelmed. Many of our health workers have collapsed from exhaustion and some are also infected. We trying to get volunteers to help out.’

Nearly 1,000 Indonesian medical workers have died of Covid-19, including more than a dozen who were already fully inoculated, according to the country’s medical association.

Desperate families are hunting for oxygen tanks to treat the sick and dying at home.

Thousands of troops and police are scrambling to enforce new virus curbs to bring down record daily cases, which soared Tuesday to 31,189 new infections and 728 deaths — as much as seven times the daily mortality rate less than a month ago.

Daily Covid-19 burials in Jakarta alone are up 10-fold since May, overwhelming exhausted cemetery workers scrambling to keep up.

On Tuesday, Jakarta said about 10,000 concentrators — devices that generate oxygen — were to be shipped from nearby Singapore with some arriving by a Hercules cargo plane earlier.

The government was also in talks with other countries including China for help, it said.