Why I Can Die For Messi – Martinez 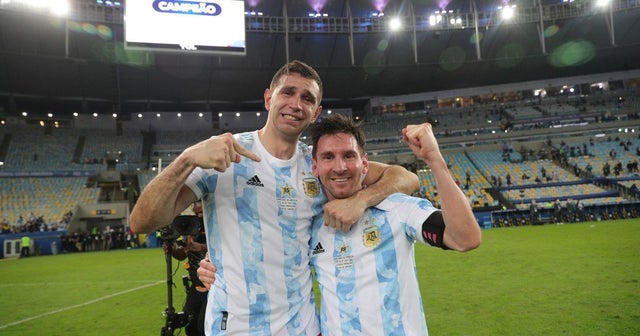 Former Arsenal Argentine goalkeeper Emiliano Martinez has revealed his strong adoration for Lionel Messi, stating that he would ‘die for him’.

In an interview with Argentine newspaper Ole, the Aston Villa shot-stopper explained that he was left speechless when Messi posted an image on Instagram of the two of them sharing a hug following their Copa semi-final win over Colombia on penalties.

Martinez was the hero in the last four clash having saved three of the five penalties.

Argentina went on to beat Brazil 1-0 in the final and claim a first international title since 1993.

‘They are sentences or pictures that you keep for the rest of your life. Or to have a frame that I’m hugging him,’ he said.

‘Same thing in the semis, when he came to hug me, same as the interview or what he put on Instagram, it gave me strength to stop in the final and be even better. It gives me strength.

‘That he puts a photo with the caption ‘he (Martinez) is a phenomenon’, how can I not perform in a final?

‘I want to give him life, I want to die for him. I said it four or five months ago, I said I prefer that he wins the Copa America before I do. And it’s true.

‘Just like every Argentine. The Brazilians, for me, wanted Argentina to win the Copa just because of Messi.

‘And an Argentine isn’t going to want Messi to win it? It (winning the Copa America) happened and hopefully we can give him the World Cup.’