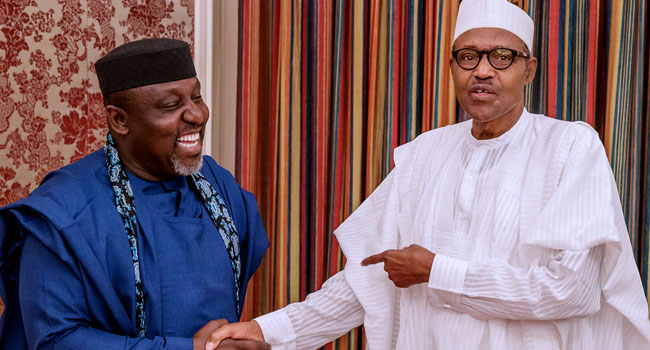 Mr. Okorocha, a senator and chieftain of the ruling All Progressives Congress (APC), yesterday stated that the Rochas Okorocha Foundation would build the university.

The former governor was recently conferred with the traditional title of Maga Alherin Kasar Hausa by the Emir of Daura, Umar Faruk.

Isa Halidu, who represented Mr Okorocha at an event in Daura on Saturday, said students would enjoy free tuition and accommodation at the university.

‘Because the Emir of Daura made me a traditional titleholder, I am going to give a gift, perhaps, that would never be forgotten. I will build an Islamic university with modern facilities under Rochas Okorocha Foundation and to be commissioned by myself in Daura town,’ he said.

He said this is because the emirate and Katsina State, in general, had shown him tremendous affection.

The iberiberism crooner noted that his Foundation has built schools and undertaken many developmental projects in other states, hence paying back Daura town for what President Buhari had done for Nigeria.

The federal government had previously announced a plan to build a university of transportation in the town with major contributions from Chinese contractors executing projects for the government.