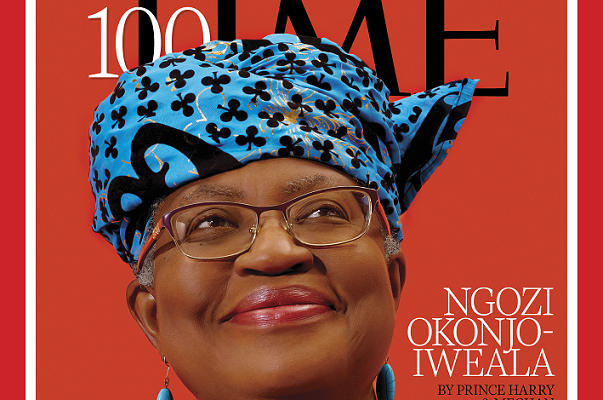 The Director-General of the World Trade Organization (WTO), Ngozi Okonjo-Iweala, has been named in Time Magazine’s 100 Most Influential People for 2021.

Africa Today News, New York gathered that Okonjo-Iweala made the list  – released on Wednesday – alongside US President Joe Biden, Angelique Kidjo, and the Duke and Duchess of Sussex, Prince Harry, and Meghan.

The list recognises ‘people whose ideas, example, talent, or discoveries transform the world we live in’.

She was named in the leaders’ category alongside US Vice President, Kamala Harris; Chinese President, Xi Jinping, and India’s Prime Minister, Narendra Modi.

Others who also made Time’s list include Naomi Osaka, Britney Spears, Donald Trump, and Elon Musk.

‘As we face a constant barrage of vaccine misinformation, bureaucratic slowdowns across both government and industry, and the rise of variants that underscore the urgency of the situation, Okonjo-Iweala has shown us that to end the pandemic, we must work together to equip every nation with equitable vaccine access,’ Prince Harry and Meghan wrote about Nigeria’s former Minister of Finance.

‘Our conversations with her have been as informative as they are energizing. This is partly because, despite the challenges, she knows how to get things done—even between those who don’t always agree—and does so with grace and a smile that warms the coldest of rooms.’

The couple explained that with about a quarter of the world vaccinated against COVID-19 and the globe experiencing fragility at the moment, achieving vaccine equity is a ‘global duty of compassion for one another.

‘Our hope is that guided by strong leaders like Ngozi, we can get there soon.’

Okonjo-Iwela, who hails from Delta State, served as Nigeria’s finance minister, first under President Olusegun Obasanjo’s government – from 2003 to 2006 – and later in President Goodluck Jonathan’s administration between 2011-2015

Africa Today News, New York recalls that earlier in the year – March – she emerged as the first woman and African to lead the WTO, a landmark development that has continued to earn her accolades globally.