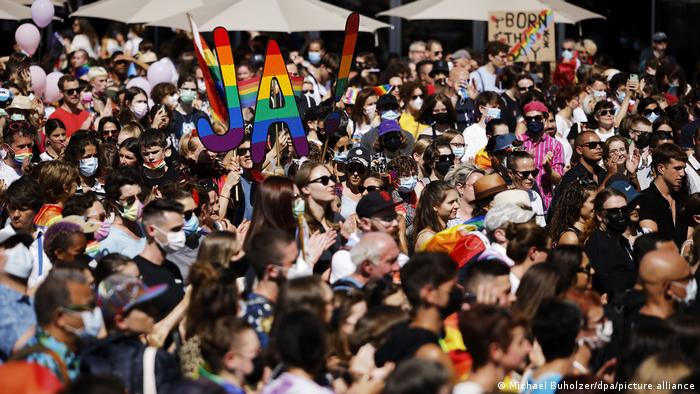 Nearly a two-third majority voted in a referendum on Sunday to legalise marriage for same-sex couples in Switzerland making it one of the last countries in Western Europe to do so.

According to results made public by the Swiss federal chancellery, about 64.1 percent of voters voted in favour of same-sex marriage in Sunday’s nationwide referendum.

‘It is a historic day for Switzerland, a historic day when it comes to equality for same-sex couples, and it is also an important day for the whole LGBT community,’ said Jan Muller of the ‘yes’ campaign committee.

Africa Today News, New York reports that Switzerland is the world’s 30th country to adopt same-sex marriages, and one of the last remaining western European nations to do so. The Netherlands was the first in 2001.

‘We are very happy and relieved,’ said Antonia Hauswirth of the national committee ‘Marriage for All’, adding supporters would celebrate in Switzerland’s capital Bern on Sunday.

Justice minister Karin Keller-Sutter said the first same-sex marriages should be able to take place from July 1 next year.

‘Whoever loves each other and wants to get married will be able to do so, regardless of whether it is two men, two women, or a man and a woman,’ she said.

‘The state does not have to tell citizens how they should lead their lives.’

World rights group, Amnesty International on Monday welcomed the move as a ‘milestone for equality’.

While same-sex couples can register a civil partnership, with about 700 established each year, the arrangement does not provide the same rights as marriage, including for obtaining citizenship and the joint adoption of children.

The amended law will make it possible for same-sex couples to get married in civil ceremonies, and adopt children. Married lesbian couples will also have access to sperm donation, in what was one of the more controversial aspects of the referendum campaign.

Proponents gathered the 50,000 signatures needed to put the issue to a referendum under Switzerland’s system of direct democracy after the Swiss parliament approved a bill last December allowing same-sex couples to marry.

Monika Rueegger of the right-wing Swiss People’s Party (SVP) and member of the referendum committee ‘No to Marriage for All’ pointed out that she was disappointed at the outcome.

‘This was not about love and feelings, it was about children’s welfare. Children and fathers are the losers here,’ she told reporters

The law will also make it easier for foreigners married to Swiss people to get citizenship.

A majority in all 26 cantons of the country of more than eight million people voted yes – even the most conservative ones. Support was strongest in Basel City at 74 percent.