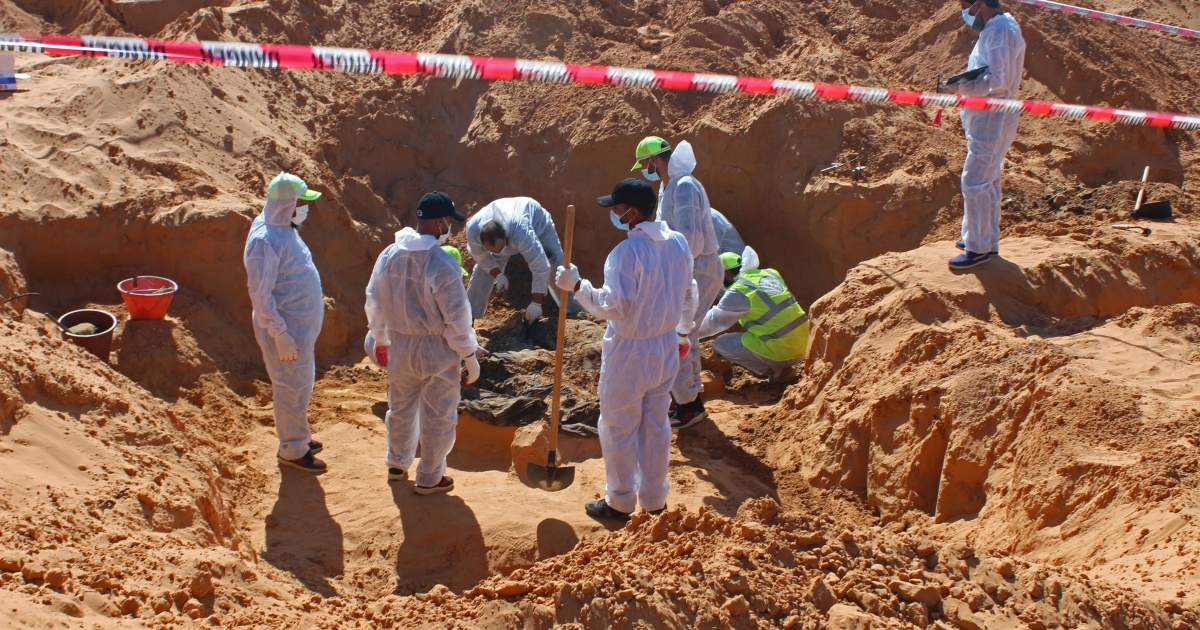 No fewer than 25 unidentified bodies have been found in mass graves in the Libyan town of Tarhuna, Libyan authorities disclosed on Tuesday.

This is coming following years of brutal militia rule that has witnessed several clashes.

Africa Today News, New York gathered that the farming town of Tarhuna was controlled for years by the Kaniyat militia, run by six brothers who imposed their dominance by slaughtering opponents and their entire families.

Around 200 bodies have so far been found, according to the department for uncovering the remains, which said another ‘five graves were discovered’ containing another 25 corpses.

The latest grim finds come after another 10 bodies were uncovered on October 4.

On the same day, a UN fact-finding mission found that all parties to Libya’s decade-long conflict have violated international humanitarian law since 2016, with some possibly guilty of war crimes.

Mass graves were initially discovered in Tarhuna in June 2020 following the withdrawal of forces of Khalifa Haftar, an eastern Libya-based military chief who had spent a year trying to seize Tripoli.

The Kaniyat, members of the Kani family, had after seizing control of the town in 2015 then allied with Haftar, providing him with a rear base for his Tripoli operation which he launched in 2019.

The group ‘often abducted, detained, tortured, killed, and disappeared people who opposed them or who were suspected of doing so’, according to residents’ testimonies cited by Human Rights Watch.

Africa Today News, New York can confirm that members of the Kaniyat have been sanctioned by the United States and Britain.

Libya has seen a decade of violence since the fall in 2011 of dictator Moamer Kadhafi in a NATO-backed rebellion, with a myriad of militias and foreign forces becoming involved.

A ceasefire between eastern and western powers after Haftar’s defeat last year paved the way for a UN-led political transition, with a unity government taking power this year to lead Libya to elections.