Yoruba Nation: What Buhari Told Me About Igboho – Ooni 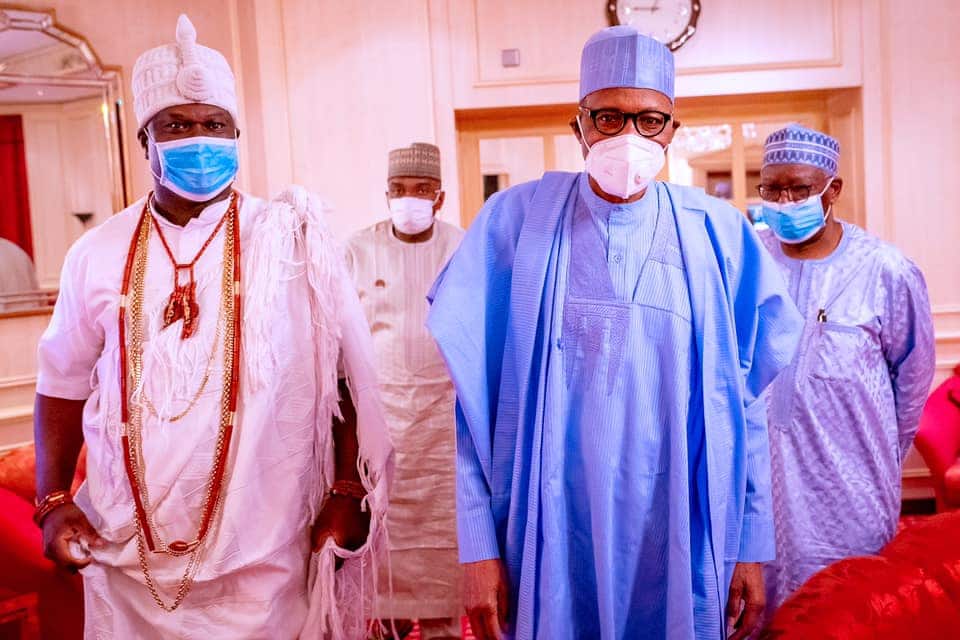 In an interview with BBC which was monitored by Africa Today News, New York, the monarch revealed that the agitator rejected advice offered him by monarchs sent to dialogue with him.

During the meeting, Buhari was informed of the reasons for Igboho’s agitation, according to the monarch.

In his reaction, Buhari was said to have said Igboho needs to be ‘calm and patient’.

The president also asked monarchs in the South-West advise Igboho against moves that are lawless.

The monarch, who said Igboho has a just cause to fight, said he should have been more diplomatic.

He alleged that Igboho was misled by politicians, insisting that the activist deserved the support of monarchs in the region.

On his part, Ooni said he had forgiven Igboho and already working to get him freed from detention in Benin Republic.

He urged other Yoruba Nation agitators to consider dialogue.

He said, ‘I have always told the government to call the agitators for a dialogue. Sunday Igboho grew up in Ife. All that he has become today, started from Ife. He fought the Ife and Modakeke war and both lands belong to Ife. He is a son of the soil.

‘He wanted to fight for his kinsmen. He stood up and fought for those killed in Oke Ogun. We thank God for preserving his life. He tried his best but he was overwhelmed by different advice from people.

‘Many people advised him wrongly. He listened to them.

‘I visited President Buhari on his case and we discussed it. I told him that Igboho is our son, he told me that he (Igboho) should stay calm and exercise patience. The president told me that monarchs should warn him to be calm.

‘After I left Buhari’s place, I called on monarchs and elders of Yoruba land for a meeting to advise Igboho to exercise patience but Igboho did not listen. He started abusing everyone, including the monarchs I sent to him.

‘He hurled so many bad words but he is still our son. God owns forgiveness. We’ve forgiven him. If he had listened, he wouldn’t have found himself in his current travail.

‘We are trying our best to secure his release.

‘It is better to fight together. We can only achieve our goal if we are united.

‘No one can fight with the government alone? You’ve to be diplomatic.’

Africa Today News, New York had reported that Igboho is currently in a detention facility in Benin Republic after he was arrested in Cotonou, Benin Republic, on July 16, 2021, with his wife, while travelling to Germany.