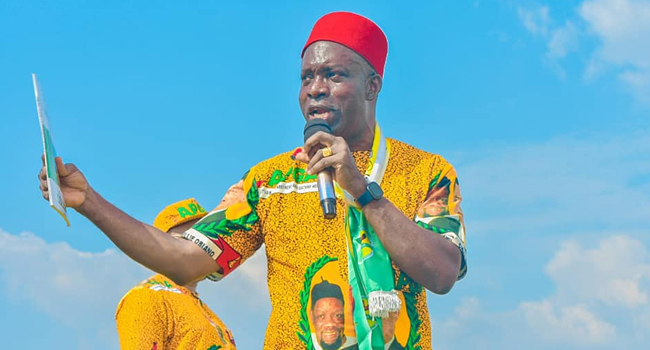 The Independent National Electoral Commission (INEC) has declared the candidate of the All Progressives Grand Alliance (APGA), Prof. Chukwuma Soludo as the winner of the November 6 governorship election in Anambra.

Soludo garnered a total of112,229 votes to defeat his closest rival, Mr Valentine Ozigbo of the Peoples Democratic Party (PDP) who scored 53, 807 to emerge second.

Senator Andy Uba of the All Progressives Congress (APC) candidate got a total of 43,285 votes to emerge the third position.

Prof. Florence Obi, Returning Officer for the 2021 Anambra Governorship election made the declaration in the early hours of Wednesday at INEC headquarters, Awka.

The commission, however, fixed Tuesday, November 9 for a supplementary election in Ihiala.

Announcing the final result, Obi noted that after adding up the results collated from Ihiala, Soludo continued his lead in the election.

She said that Soludo won in 19 out of the 21 Local Government Areas of the State.

The returning officer, who doubles as the Vice-Chancellor of the University of Calabar, said: ‘Prof. Chukwuma Soludo having scored the highest number of valid votes was declared winner of the election’.

The returning officer had earlier stated that Anambra with a total number of 2,466,638 registered voters only had a total of 253, 388 accredited voters for the election which began on Nov. 6 and was extended to Nov.9, 2021.

Soludo, a onetime Governor of the Central Bank of Nigeria, was born on July 28, 1960, and hails from Isuofia, Aguata Local Government Area of Anambra State.

He obtained a first in Economics at the University of Nigeria, Nsukka (UNN) and worked in many National and international organizations including the World Bank and the United Nations Economic Commission for West Africa and the International Monetary Fund (IMF).

Prof Soludo was the Economic Adviser to former President Olusegun Obasanjo and the Chief Executive Officer of the National Planning Commission among other achievements.