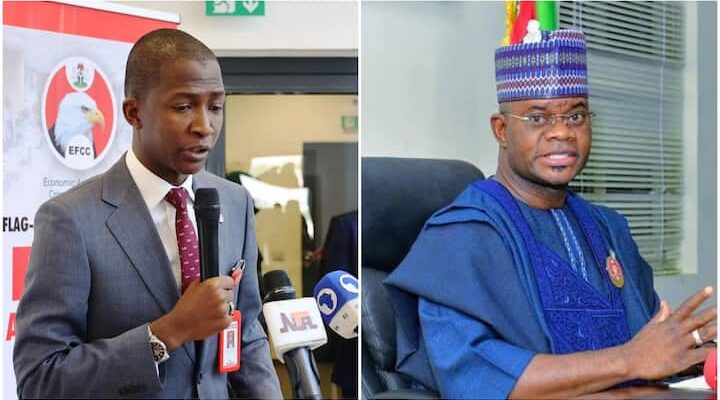 Kogi State Commissioner for Information and Communication, Mr Kingsley Fanwo, has disclosed that the State Government has enough facts to disprove the allegation on the diversion of the bailout funds by the Economic and Financial Crimes Commission (EFCC).

Africa Today News, New York had earlier reported that the EFCC had confirmed the return of ₦19. 33 billion Kogi State salary bailout funds, recovered by the Commission, to the Central Bank of Nigeria (CBN).

Reacting, Fanwo in a statement made available to newsmen on Saturday said that the Kogi government would prepare a comprehensive response to what it called ‘the desperate moves by EFCC.’

The commissioner stated that EFCC’s move was only a way to save its face over its unethical conduct in the matter.

‘It is laughable the EFCC’s attempt to desperately wriggle out of a bad case with another mischief aimed, again, at misleading Nigerians.

‘The EFCC had finally exposed the fact that it had been pursuing a political agenda all along.

‘The press statement by the commission is a malicious attempt to rope the state into a matter that ordinarily has nothing to do with our dear state.

‘We maintain the unassailable truth that the Kogi State Government did not operate such account with the Sterling Bank as affirmed in a letter by the bank.

‘We sympathise with the EFCC as it has been a herculean task to cover the initial misinformation and deliberate deceit by the commission,’ the statement added.

Fanwo stressed that the Kogi government would react to the latest EFCC’s statement comprehensively, noting that ‘every option that is legal will be considered to maintain the innocence and transparency of our government.’

‘Kogites (Kogi people) and indeed, Nigerians should be rest assured that we will get to the root of this matter,‘ he assured.