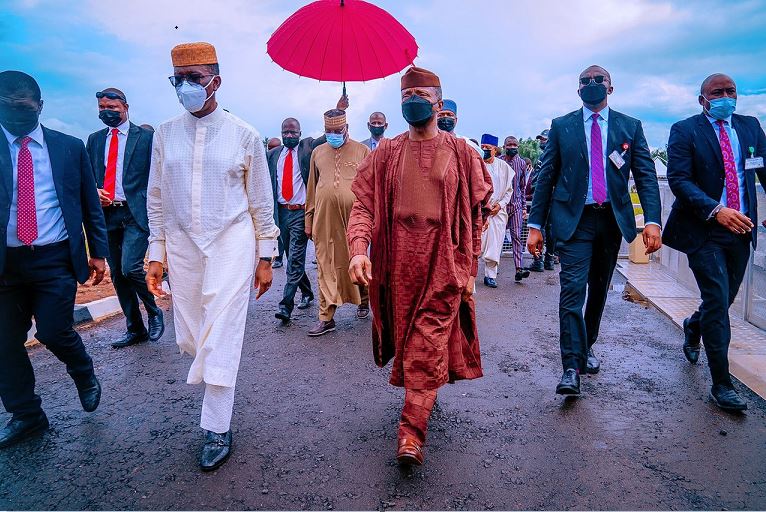 Nigeria’s Vice President, Prof. Yemi Osinbajo, on Monday, asserted that Delta State Governor, Ifeanyi Okowa would leave worthy legacies behind for Deltans when he leaves office for his successor in 2023.

Speaking in Asaba during the commissioning of the multi-billion naira Prof. Chike Edozien Secretariat Complex for civil servants and the 8.5 Megawatts Asaba Independent Power Plant, IPP, Osinbajo said the secretariat complex was a major monument enshrining the power and splendour of the authority of the State Government.

While noting that Okowa deserves commendation, he said: ‘Despite dwindling revenue receipt and severe resource constraints across all levels of government, the governor has been able to provide funding for this project.

‘Public servants require an environment that brings out the best in them, and this secretariat complex will provide such an environment.

‘The completion of this complex is another demonstration of what Okowa has shown over the years that with visionary leadership, a state government can do incredible things indeed, and am sure this one would be a worthy legacy.’

Okowa who spoke earlier, said: ‘I stand here today feeling very proud of this legacy project. Indeed, I am filled with a great sense of joy, satisfaction, fulfillment, and triumph. It was an arduous journey from the time construction commenced on November 27, 2017, to this momentous occasion.

‘As you would expect, constructing an edifice like this would task the ingenuity, resources, and patience of any government in the times we live in.

‘It was quite demanding and exacting, and there were times we were tempted to throw up our hands in despair, and even questioned the wisdom for embarking on a project of this magnitude. The turbulence that has plagued the economy since 2017 was worsened with the outbreak of the COVID-19 pandemic, causing major financial disruptions during the construction process.

‘However, we persevered and weathered the storm fully persuaded of the huge benefits accruable to the state once the structure was completed. With the ministries in one central location, the state government will be saving hundreds of millions of naira that was spent annually in renting offices all over the capital city.

‘Coordination and synergy among MDAs would be enhanced, leading to higher morale, better time management, efficiency, and greater productivity.’

Africa Today News, New York gathered that the state secretariat complex was solely executed by the state government, but the Asaba IPP was executed in partnership with a private firm,  Bastanchury Power Solutions Nigeria Limited and Africa Plus Partners.