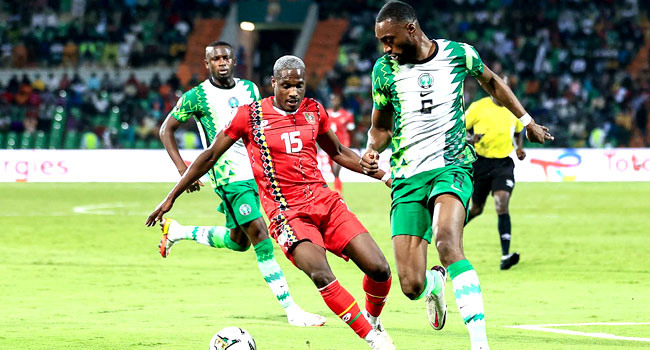 The Super Eagles of Nigeria on Wednesday continued their winning run at the 2021 Africa Cup of Nations (AFCON) with another victory over Guinea-Bissau which saw them become the first team to win all their group matches in this year’s edition of the continental competition.

Just like their first and second games with Egypt and Sudan respectively, Nigeria displayed a brilliant performance to outclass their West African counterparts 2-0 amid excitement and cheers from supporters.

Africa Today News, New York reports that the Eagles took on the Djurtus in their third Group D match at Stade Roumde Adjia in the port city of Garoua, the capital of Cameroon’s northern region.

They maintained a dominant form to end their group campaign, winning all nine points from three matches – the first team to record such feat in the ongoing tournament.

The three-time African champions went into the match with high spirits, taking charge of the first half of the game as fans cheer the players with drums and other musical instruments.

But this was not enough for Nigeria to get the ball past Guinea-Bissau’s goalkeeper until the referee blew the whistle, marking the end of the first half.

At the resumption of the match, Nigerian forward Umar Sadiq put the Eagles ahead of their Guinea-Bissau contenders thanks to assist from teammate Kelechi Iheanacho in the 56th minute.

Shortly after taking the lead, coach Augustine Eguavoen made his first change of the game and substituted Sadiq and Chidera Ejuke with Peter Olayinka and Moses Simon respectively.

Barely 20 minutes later, Simon dribbled his way into the 18-yard box of the Djurtus before aiming for another goal for the Nigerian side.

Although the ball hit the bar, captain William Troost-Ekong proved the ability to lead the team by coming to the Eagles’ rescue. But Nigeria were not sure if they had extended the lead until the Video Assistant Referee confirmed a second goal.

The three-time African champions went on to maintain the lead until the referee blew the final whistle.