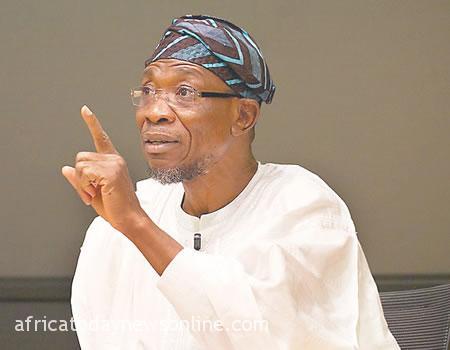 Some yet-to-be identified gunmen on Monday attacked the convoy of Nigeria’s Minister of Interior, Rauf Aregbesola, during a roadshow he conducted in Osogbo, the Osun State capital.

Africa Today News, New York gathered that the gun-wielding hoodlums, who were suspected to be political thugs, ambushed his convoy and started shooting in a bid to scare away the former governor of the state and members of his entourage.

The pandemonium broke when Aregbesola got to Orisunbare market, close to Old-Garage when sounds of gunshots rented the air.

There was mild pandemonium as his supporters ran away as they scampered for safety.

Africa Today News, New York gathered that a team of combined security operatives from the Nigeria Security and Civil Defence Corps, Nigeria Immigration Service and Department of State Security, who were among Aregbesola’s convoy, were however able to repealed the thugs after exchanging gunfire for a while.

This particular incident is coming just a few days after Aregbesola openly declared support for the former Secretary to the State Government, Moshood Adeoti and proclaimed him as the next governor of the State.

Watchers in the State believe that the decision which is a direct shot to the leader of the All Progressives Congress (APC) and former Governor of Lagos State, Bola Tinubu who prefers his cousin, who is the incumbent Governor.

Meanwhile, Africa Today News, New York had earlier reported that Osun State had announced that it has credible reports that some ‘misguided cowards’ have invaded Osogbo, the state capital with armed thugs to foment trouble.

No arrest has been made so far as at the time of filing this report, however the police has been on the trail of the hoodlums with the view of unravelling their intentions.