‘I Remain Governor of Ebonyi’, Umahi Reacts To Court Ruling 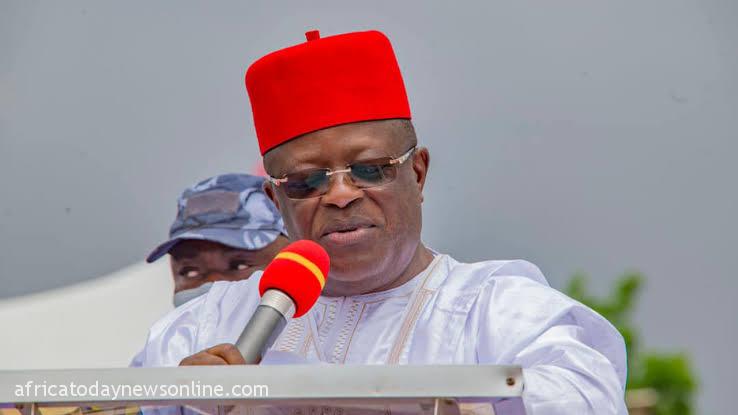 Ebonyi Sate Governor, David Umahi has reacted to Today’s judgement of the Federal High Court in Abuja that declared his seat and that of his Deputy, Kelechi Igwe, vacant over their defection to the All Progressives Congress (APC) from the People’s Democratic Party (PDP).

Reacting to the ruling, Umahi maintained that he is still the governor of the State despite the court ruling and would not be vacating office as ordered.

The governor also called on his followers to disregarded the ruling in its entirety.

Addressing journalists in his office in Abakaliki, Governor Umahi described the ruling as ‘jungle justice that was purchased.’

The governor further insisted that such ruling was not a good development for the Judiciary and must be overturned in due course.

Africa Today News, New York had earlier reported that Justice Inyang Ekwo of an Abuja Federal High Court had sacked Umahi as governor of Ebonyi State and his Deputy, Dr. Kelechi Igwe from office over their defection to the national ruling party early last year.

The judge sacked Umahi and his Deputy over their unlawful defection from the Peoples Democratic Party, PDP, to the All Progressives Congress (APC).

He ruled that the governor and his Deputy’s defection was unlawful, unconstitutional, null, and void.

The judge ordered them to vacate their offices immediately.

Ekwo held that the vote that brought the governor and his Deputy into office belonged to the PDP and that they cannot hold onto the votes having elected to jettison the party that nominated them.

Africa Today News, New York reports that Umahi who is currently on his second tenure is also seeking to replace President Muhammadu Buhari as President next year.

The People’s Democratic Party (PDP) in Ebonyi was yet to react to the ruling.