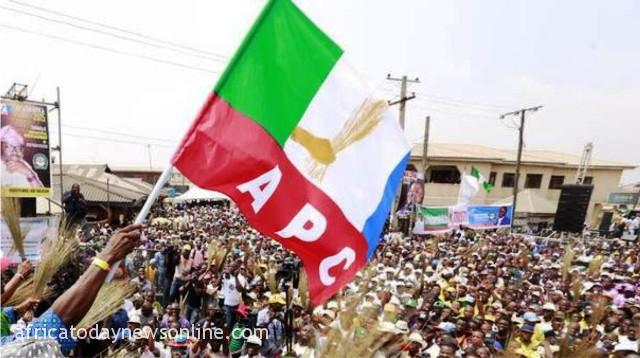 The All Progressives Congress (APC) has announced the postponement of its zonal congresses earlier slated for next Saturday disclosing that it will now hold on March 26, 2022, simultaneously with the party’s national convention.
Addressing a press conference on Friday in Abuja, member of the Caretaker Committee and current spokesman for the party, Barrister Ismaeel Ahmed, revealed that the party has already transmitted a notice of convention to the Independent National Electoral Commission (INEC).
Barr. Ahmed also countered the Niger State Governor, Sani Bello’s claim that Yobe State Governor and Chairman of the Caretaker Committee, Mai Mala Buni, didn’t transmit a letter to him to act before jetting out of the country for medical attention.
There was a letter in the public domain on Thursday indicating that Buni had transmitted a letter to Governor Bello to act as chairman of the Caretaker Committee, but the Niger governor in an interview with newsmen denied receiving any letter from Buni in that regard.

Governor Bello had been performing Buni’s role at the party’s national secretariat since Monday, saying that the aim was to quicken the process of holding the national convention on March 26.
Barrister Ahmed said, ‘The moment the CECPC agreed on the 26th of March, that letter was written to INEC. INEC has accepted that letter. So that is long gone; it is not an issue. The issue of the date of convention is not in question, not in INEC, not certainly with us. That is settled.
‘I don’t know why this is a complicated process for a lot of people to understand. Since the inception of this CECPC on June, 25 2020, whenever the chairman is not around and Governor Sani Bello is around, he acts on behalf of the Chairman. It has always been the case that has never changed. It has always been the case.
‘And now we have a convention on the 26th of March, the chairman wrote a letter and transmitting, for his leave to go for medical treatment. These are two emergencies. He has a medical emergency that cannot wait for convention. We have a convention that cannot wait for him to be healthy.
‘So one has to leave for another. The Chairman left, transmitted a letter, Governor Sani Bello has been acting appropriately. What is the problem? Why is it difficult for people to simply understand that? It is very clear and very simple. If anybody has any issues with any of our decisions, you can take it to court. For now we are doing it with the full authority and backing of the law. So there is no ambiguity in this; absolutely none.’
He said the issue of INEC not accepting the party’s notice for a National Executive Committee (NEC) meeting slated for next Thursday was being sorted out.
AFRICA TODAY NEWS, NEW YORK