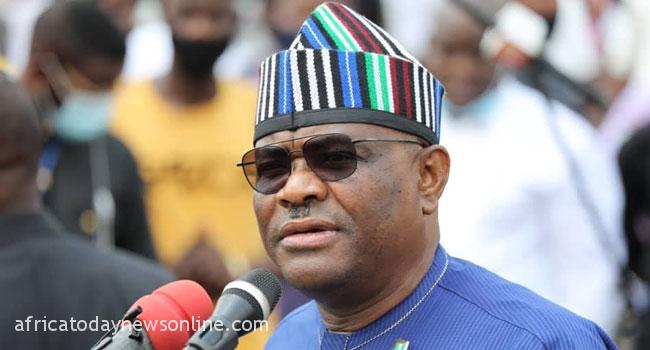 The Governor Rivers State, Nyesome Wike on Saturday asserted that the Peoples Democratic Party (PDP) will stop at nothing to reclaim the Ebonyi governorship seat following the defection of the Governor, David Umahi to the All Progressives Congress (APC).

Governor Wike maintained that despite the initial comments by Governor Umahi to disparage the judiciary, the party will not be intimidated to chicken out of the legal battle, vowing to support the party to fight it out to the Supreme Court.

He was speaking at the commissioning of the reconstructed 3.4km eastern bypass in Port Harcourt.

‘Nobody has gone to court to seek interpretation of a Governor who has defected from one party to the other,’ he said. ‘This is the first time. And so it looks new to people and they ask whether you can remove a Governor.

‘It is better for the court to make a pronouncement. Everybody will have to be careful.

‘You give somebody an umbrella and the next day he defects. EFCC will come, he will say let me join them so EFCC will not go against me. You carry the vote of another party and join another party. Can you transfer votes? If you are defecting, leave the seat.

‘And this will checkmate most of these political harlots who will never sit one place, looking for excuses here and there.

‘Governor Umahi, be rest assured that PDP will continue this matter down to Supreme Court.’

Africa Today News, New York recalls that Umahi had last week had been sacked by a Federal High Court in Abuja for defecting to the APC from the PDP.

However, the Governor has applied for a stay of execution and approached the Court of Appeal for a review.