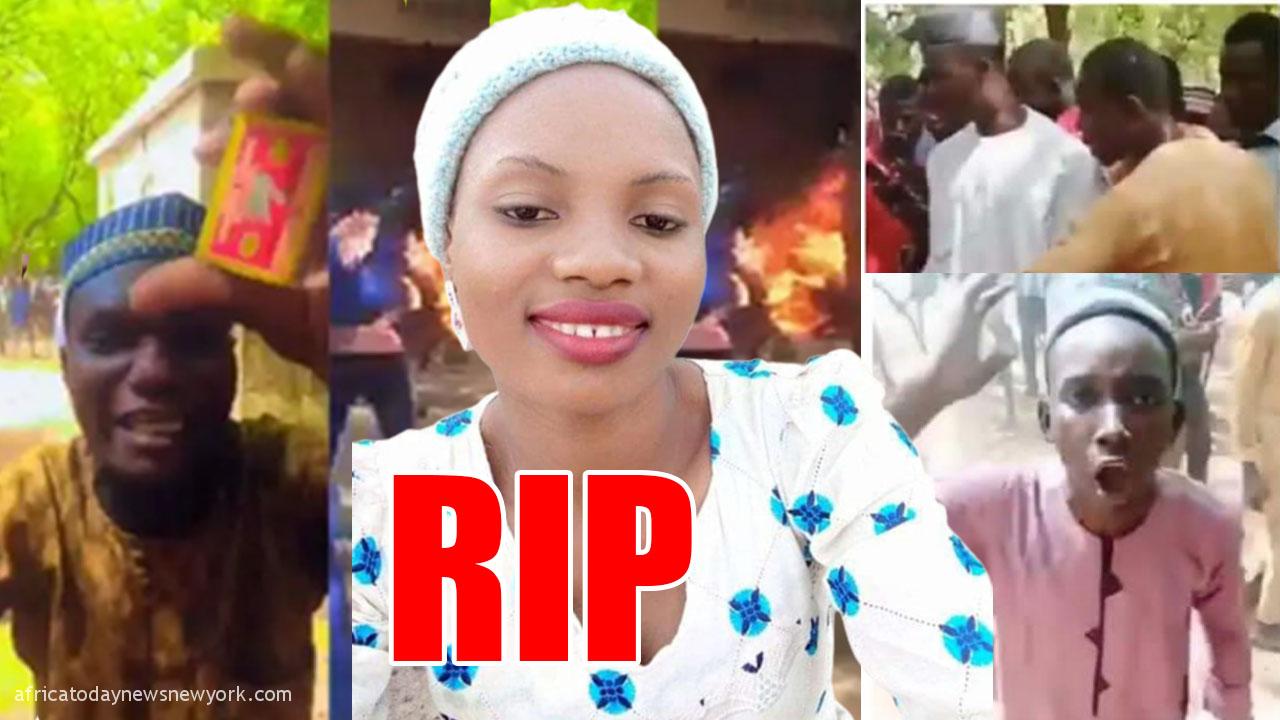 A week ago, many Nigerians were pushed off from the euphoric mode of the ongoing political shenanigans when a group of students from Shehu Shagari College of Education, Sokoto, lynched and burnt the body of Miss Deborah Samuel over unfounded allegations of ‘blasphemy’ against Islam and the Prophet Muhammad. That particular development once again brought the fault lines to the front burner while also heightening the religious tension in the country.

According to reports, Deborah Samuel, who was a second-year student at the Economics Education Department of Shehu Shagari College of Education, Sokoto, Sokoto State, was on the receiving end of religious brutality against her by her fellow Nigerians who foolishly assumed that they should be warriors for their God and his prophets—willing to hack down any soul that utters a word against his so-called supremacy.

On that fateful day, Deborah had gone to school just like everyone else, and just before the end of business for the day, she was accused of blasphemy against Islam by her peers in school and was peremptorily set upon in the brutal fashion of such attacks taken straight from the despotic reign of medieval kings. Without being given an opportunity to tell her own side of the story, she was clobbered to stupor, stoned, and as soon as life ebbed out of her fragile body, her murderers made sure her body went up in flames. What barbarity! After carrying out the heinous crime, her killers, who were mostly young men within her age bracket, gleefully celebrated and self-identified as her murderers on camera with careless impunity.

Truly, the murder of Deborah was really horrific and heart-wrenching, but even more horrific was the forceful defense and justification of her murder by many Muslims, directly or indirectly. Topmost on that shameful list of her defenders of her killers was former Vice President, Atiku Abubarkar, who concluded that deleting his earlier condemnation of the act was the way to go. To think that Atiku was someone a considerable number of Nigerians considered rational, thoughtful, compassionate, and reasonable—someone who prided himself on being a detribalised Nigerian devoid of bigotry—alas, they were wrong.

Shortly after Atiku’s shameful outing, only platitudinous statements made up of bursts of hot air, clearly lacking empathy, not to mention vigour, continued to emanate from leadership and political circles. From a terror sympathiser like President Muhammadu Buhari, who had in the past spoken in favour of religious extremists like Boko Haram, to his shameless Christian pastor of a Vice President, Prof. Yemi Osinbajo, who could only express his profound sadness at the turn of events without roundly condemning her killers or the ideological lunacy that spurred them. Other leading politicians lined up for the next round of elections who are very notorious for reacting to issues suddenly went mute. The parents of Deborah, Garba, and Alheri Emmanuel were pushed out into the cold and forced to live with their daughter’s senseless murder for the rest of their lives.

As expected, her death sparked several reactions from different parts of Nigeria, with many Christians and moderate Muslims calling for her arrest, which eventually led to the arrest of two of the alleged perpetrators. Sadly, by Saturday morning, the situation went from bad to worse as many youths in Sokoto trooped out to protest the arrest of the two suspects, insisting that the lynching of Deborah was right under Islam. To buttress their temerity, they mandated the state government and security agencies to urgently release those arrested in connection with the killing or face harsh consequences. Shortly after issuing this warning, the rampaging youths were already on a destructive mission as they immediately began burning down people’s properties and places of worship.

There was no justification for that murder. Deborah’s killing was wrong, inexcusable, condemnable, and unjustifiable even in the teachings and legal system of Islam. That she allegedly said unkind words about the Prophet Mohammed does not come close to justifying it. The said Prophet, and indeed other Prophets and Messengers of Allah before him, were mocked, insulted, and laughed at. In fact, this was mentioned in several places in the Qur’an. There are several instances in the history of Islam where Muhammad forgave his worst enemies, so why did those backward-thinking mobs snuff out her precious life without remorse?

According to Deborah’s parents, they have left everything to their God, as is to be expected of people condemned to a life of pain by their own helplessness. It’s surely a very painful situation for them, no doubt. If Deborah’s parents, like hundreds of millions of Nigerians outraged by that murder, are helpless, what excuse does the government have? Why are they bowing, scraping, and dancing around the issue of how justice must be served in this foulest of murders? What has the Nigerian government ever done to dissuade the terrorism that feeds on the kind of religious fundamentalism of the anti-social elements that murdered Deborah? The truth is that Nigerians do not appear to trust its legal system because they have witnessed far too many of these cases that are never prosecuted and instead fade away until another senseless slaughter or religious irruption brings them back as reminders of their failure.

Many Muslims in Nigeria have often asserted that Islam is a ‘religion of peace‘ and the question on everyone’s lips is, what is the sops about a religion being of peace when the violence of some of its practitioners goes without any form of condemnation? For crying out loud, bring these criminals to justice! What the government of Aminu Tambuwal, a presidential hopeful; what President Buhari, as were the others before them, lack is the will to commit to the protection of life and stem this senseless shedding of innocent blood by murderers disguised in religious garbs.

Another interesting angle to this conversation is that Muslim youths in Northern Nigeria always seem battle-ready to take the law into their own hands over real or contrived charges of blasphemy. Quite strangely, this ugly trend is not so evident in the South-West, which also has its own entrenched culture of Islamic adherence. Also, Muslims in countries like Egypt, Pakistan, Afghanistan, and others regularly engage in blasphemy killings while hardly any such thing is reported in other countries like the United Arab Emirates, Turkey, Morocco, Ghana, and others, so clearly, there is something wrong with Muslims in Northern Nigeria and what this means is that the missing link is a lack of proper education and orientation.

One can easily deduce that countries that have taken control of and provided guidance to their citizens with regard to such volatile matters by properly educating them enjoy peace and harmony, which are essential for stability, sustainable development, and a better life for the people.

This is something successive Muslim leaders and scholars have failed to do in an explosively diverse Nigeria. Northern Nigerian Muslim leaders must take greater responsibility for reconditioning their youths by educating them to embrace the nobler nuances of the Islamic faith for peace. It’s about time they took the bull by the horns and made amends, because if they don’t, more Deborahs will be sacrificed for no reason.

Genuine efforts must be made to forge a national template on inter-religious relationships. People must be held to account for any breach of the law. That Imam, who was caught in the viral video inciting the youths to kill Deborah, must be arrested to face justice along with other culprits.

Finally, it is rather sad that the Nigerian Constitution, which has been loud in proclaiming Nigerians’ right to free expression but lax in enforcing it, failed to protect Deborah. Maybe it is time for the country to be re-evaluated to reflect present realities. One country operating two constitutions is something one can only find in an animal kingdom. The country must and should be allowed to restructure itself along its fault lines or be allowed to peacefully burst. Deborah, rest in peace. Your country failed you.