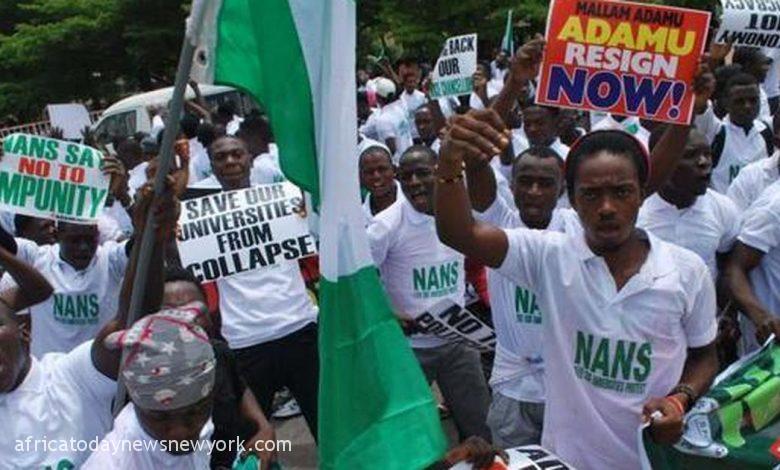 The National Association of Nigerian Students (NANS) has threatened to mobilise themselves to shut down major airports if the face-off between the Academic Staff Union of Universities (ASUU) and the Federal Government is not resolved in the coming days.

The South West Zone D Coordinator, Mr. Adegboye Olatunji, issued this threat yesterday in Abuja, yesterday, during a protest to the All Progressive Congress (APC) Secretariat in solidarity with Governor Dapo Abiodun of Ogun to run for second term.

He pointed out it was time both parties came together to resolve the issues that led to the strike as students were at the receiving end.

‘We are planning to block government organisations that generate money for them if the ASUU issue is not resolved. We have been protesting on this issue by occupying major roads in the South West but we believe if we ground airports, the government will do something about the strike,’ he said.

Meanwhile, elder statesman, Edwin Clark, said there was need for Minister of Education Adamu Adamu to take over negotiations regarding ASUU strike.

He said Adamu was in a better position to arrive at a reasonable agreement with ASUU. He said that education matters ought to be handled by someone who appreciates effect of the strike, adding that it was affecting every fabric of the economy.

According to him, besides the long term effect, the strike has distorted school calendar, increased crime rate, impoverished communities that make a living from schools among other things.

‘The Federal Ministry of Education should take over negotiation from labour because the labour ministry is treating ASUU case like any other industrial matter.

‘ASUU is not fighting for their personal interest alone.   I learnt it is only now they are including the review of their own salary otherwise the 2009 agreement they are talking about is for infrastructure development.

‘In every country, education is number one on the list. Once the people are educated, other sectors of the economy will have fewer challenges.

‘The Accountant-General who was supposed to have generated this payment is alleged to have embezzled N80 billion.