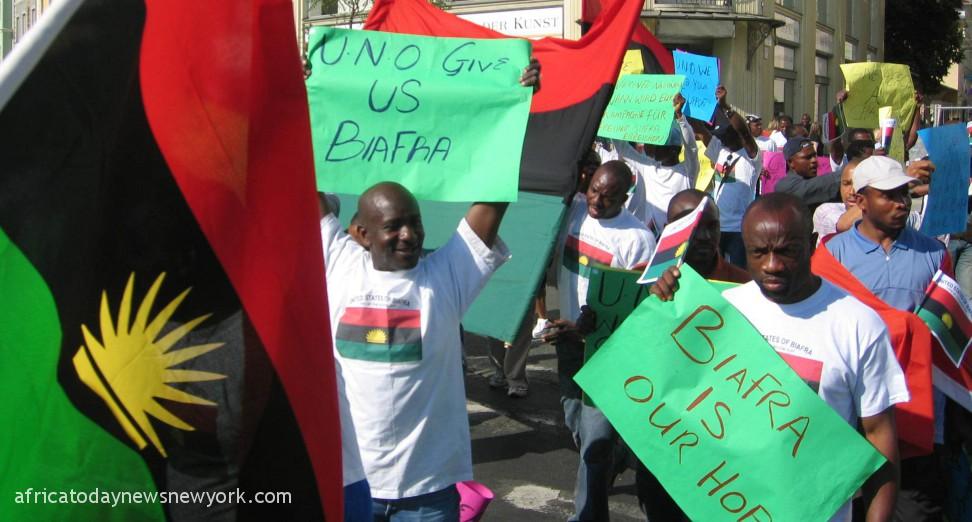 The Indigenous People of Biafra (IPOB) have condemned in strong terms the beheading of Hon. Okechukwu Okoye, describing it as an abominable act that should not be allowed to repeat itself.

IPOB alleged that the abominable beheading of Hon. Okoye is the handwork of the fifth columnists and enemies of Biafra freedom and traitors in the Southeast region who are seriously pulling all stunts to derail the freedom of its leader Mazi Nnamdi Kanu, and the freedom of Biafra.

IPOB in a statement signed by its Media and Publicity Secretary, Emma Powerful, entitled, ‘Beheading of Anambra Lawmajer, abominable also alleged that the investigation conducted by its intelligence unit has revealed that the people behind the killings in Southeast particularly, the lawmakers killing have been well mobilized and financed by DSS, NIA and DMI to create anarchy in Southeast in a tempt to derail its march to match to freedom, adding that they are bent on destabilise the efforts of the IPOB in wading of terrorist herdsmen in Southeast.

IPOB’s statement read, ‘We the global family of the Indigenous People of Biafra, IPOB, under our great leader Mazi Nnamdi Kanu, strongly condemn the abominable beheading of Hon. Okechukwu Okoye who was abducted few days ago in his area.

‘We want to also state categorically that contrary to insinuations in some quarters, the Indigenous People of Biafra, IPOB cannot in any way have anything to do with this abominable act of killing a lawmaker.

‘After thorough investigations by our intelligence team, we found out that the abominable beheading of Hon Okechukwu Okoye is the system of the fifth columnists who are bent to destabilise the efforts of the Indigenous People of Biafra, IPOB. These barbarians have been well mobilized, financed by DSS, NIA and DMI to create anarchy in our land in an attempt to derail our match to freedom, and the peace we have achieved through wading off terrorist herdsmen in our land.

They will commit those heinous crimes and their paymasters will use Nigeria compromised media houses to accuse IPOB of being responsible for what we know nothing about. The question is why is IPOB being demonized unnecessarily? The simple answer is that we are fighting for the freedom of our people because we rejected their forceful take over of our land.

‘The IPOB intelligence unit working round the clock discovered the gimmicks and antics of Nigeria government and its security agencies, especially the Army, DSS, Police, NIA and DMI intelligence. Those pointing accusing fingers at us are the same people sponsoring the disturbing insecurity in our land.

‘BIAFRA LAND has been infiltrated by Fulani terrorists wearing Nigerian security uniforms and operating as agents of death and destruction of Biafraland. It simply fits into their game plan to accuse IPOB of these horrendous crimes having failed in their initial plan to destroy the ESN created to checkmates the excesses of these Fulani marauders hiding in our forests and bushes.

‘But one thing is certain IPOB will hunt these criminals down either directly or indirectly. How will killing our people benefit us. Those causing this confusion including those terrorising Nnewi South council area, will soon hear from us’.

‘We want to ask this question to those pointing accusing fingers against IPOB. How could criminality and killing of lawmakers bring about the independence of Biafra which IPOB is after?

‘We want to warn those killers to vacate our land without further delay now they still have the opportunity otherwise judgement day is fast approaching.

‘IPOB is not in the business of kidnapping or car snatching and has never been and will never be and therefore we absolutely have nothing to do with the kidnap and subsequent beheading of Hon. Okechukwu Okoye.

‘The kidnappers kidnapped the lawmaker on the day the Executive Governor of Anambra State Professor Charles Chukwuma Soludo visited our leader Mazi Nnamdi Kanu in the DSS custody and every member of IPOB was very happy because he is the only Governor in the whole of Biafraland who summoned the courage to visit our leader in Abuja, since his extraordinary rendition from Kenya and detention in Nigeria.’

Africa Today News, New York reports that the secessionist group has been fingered in the ongoing killings in the South East due to their violent rhetorics.