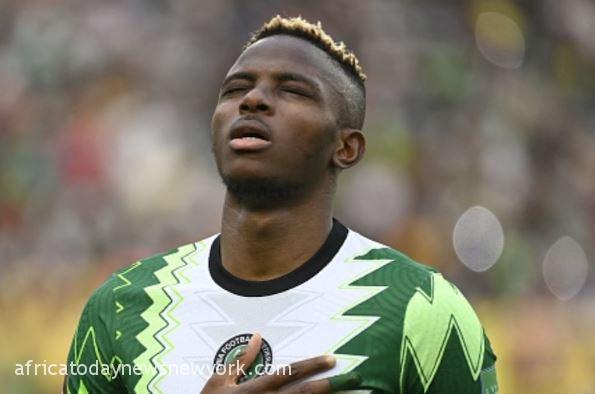 The Super Eagles of Nigeria on Monday for the first time since 1959 scored 10 goals in a competitive match after humbling Sao Tome and Principe at the Agadir Stadium, Morocco. The result is Nigeria’s best since they beat the Benin Republic 10-1 in 1959.

The game also presented Super Eagles’ striker of the moment, Victor Osimhen, the opportunity to score his first hat-trick for the senior team. In fact, Osimhen went a goal higher, scoring four goals in a competitive game for Nigeria for the first time ever in his promising career.

Osimhen’s four goals brought his tally for Super Eagles since he made his debut in 2017 to 15 goals in 22 matches. At 24, the Napoli FC striker still has enough time to chase Rashidi Yekini’s record 39 goals for the Super Eagles.

Sao Tome and Principe also presented Watford striker, Emmanuel Dennis, with the opportunity to score his first goal for the Super Eagles. Indeed, it was a one-sided affair that could have recorded higher goals, but for the offside rule.

Nigeria started the game second in the Africa Cup of Nations qualifying series’ Group A, behind Guinea Bissau, who defeated the hapless Central African country of two islands 5-0 in their opening game of the series.

But the Nigerians were determined to correct the pacing on the table, with Osimhen opening the goals rain in the 10th minute when he placed a textbook header beyond Sao Tome’s goalkeeper, Anastacio Braganca.

What would have been Osimhen’s second goal in the 20th minute when he stroked in an Alex Iwobi pass was ruled out for offside.

The second half was just three minutes old when Osimhen resumed his goals scoring spree, this time with Ademola Lookman providing the cross.

It soon became 5-0 through a fantastic freekick by Oghenekaro Etebo, which hit under the bar and sailed into the net in the 55th minute.

What would have been Osimhen’s first hat-trick for the Super Eagles was cancelled in the 57th when his strike off a Zaidu Sanusi cross was ruled out for offside.

With Coach Jose Peseiro bringing in Shehu Abdullahi and Ahmed Musa for Ola Aina and Simon, the Eagles went a gear higher and it was no surprise in the 60th minute when Moffi scored his second goal (his first for Nigeria) off a Sanusi cross.

Not to be left out, Lookman scored his first goal and Nigeria’s seventh in the 63rd minute when he tucked in a rebound from Moffi’s strike, which Braganca parried onto his path.

Seven soon became eight in the minute when Osimhen scored his hat-trick by placing a low shot beneath an onrushing Braganca.

The former Golden Eaglet completed his historical day in the 84th minute when he beat the offside trap to net Super Eagles’ ninth goal of the one-sided game.

There was still time in the added time for Dennis to complete the rout when he rose up from a foul to put the resulting penalty kick beyond a hapless Braganca.

With the result, Nigeria tops Group A with six points and +11 goals. The Eagles are followed by Guinea Bissau, who drew 2-2 with Sierra Leone in Freetown later yesterday. Guinea Bissau has four points from the same two games as Nigeria, with a +5 goals aggregate. Sierra Leone has one point, while Sao Tome and Principe has zero points.

The Super Eagles’ next games in the series are against Guinea-Bissau home and away in September.