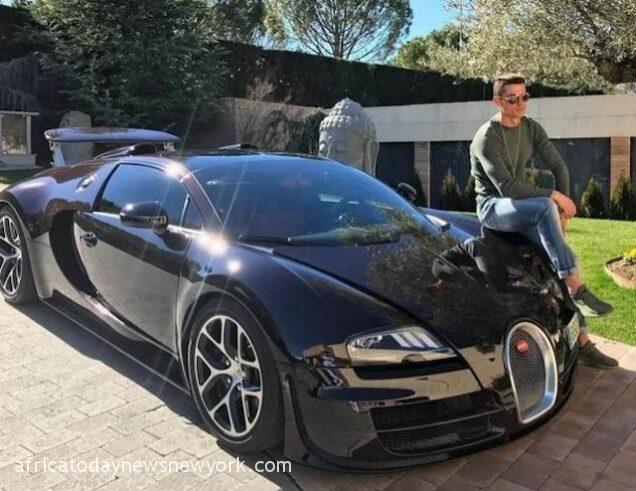 One of his super toys, the Bugatti Veyron which the top soccer star, Cristiano Ronaldo recently purchased has been crashed into a house in Majorca, Spain according to some reports in Spain on Monday.

The reports had indicated that the crashed car, which is currently valued at £1.8million, about ₦925 million was one of two that the United star had shipped over to join him in Majorca.

The 37 year-old Manchester United superstar is currently on the Balearic Island, enjoying a holiday with family before he finally returns to the United Kingdom for pre-season, which begins later this month.

Read Also: Rape: US Judge Strikes Out Suit Against Ronaldo

El Periodico Mediterraneo report that the Bugatti Veyron was being driven by an employee of the Portuguese superstar, when it crashed into the entrance of a house on Monday morning.

The report also showed that the driver of the vehicle had suffered no serious injuries, but there was said to have been extensive damage to the front of the vehicle.

As well as being one of the greatest players in the history of football, the record-breaking goalscorer has a love of supercars and has a fleet valued at around £17m.

In a recent documentary of which his partner Georgina Rodriguez was the subject, fans were given a glimpse at his array of vehicles including a Ferrari 599 GTO, a McLaren Senna and a pair of Rolls-Royces in his toy fleet.

In another report, a former Manchester United forward, Teddy Sheringham has also reported that the new manager, Erik ten Hag needs to work out whether attacker Cristiano Ronaldo fits into his preferred playing style next season.

Sheringham believes Ten Hag needs to figure out if Ronaldo will offer “help” or be a “hindrance”.

Ten Hag recently took over a Man United side that endured their worst ever Premier League campaign with respect to points in the 2021-22 season. Man United also failed to win any trophy and finished outside of the Premier League top four.

“A superstar like Ronaldo will demand to play. Ronaldo has to understand his own body as well and appreciate that he is not 28 anymore. He is not at the pinnacle of his career,” Sheringham told Lord Ping (as quoted by Manchester Evening News).

Sheringham added: “It is a tough one because Manchester United fans want to see him out there because he can still produce moments of absolute brilliance. Is he going to be perfect for the way Ten Hag wants to play? Ten Hag needs to work that out. He needs to think if Ronaldo will be a help or a hindrance.”

“I think he will be a help because he’s a world-class player, but he does not have the mobility as much as he used to.”